They were not happy with the balance changes made by the developer and are quitting. 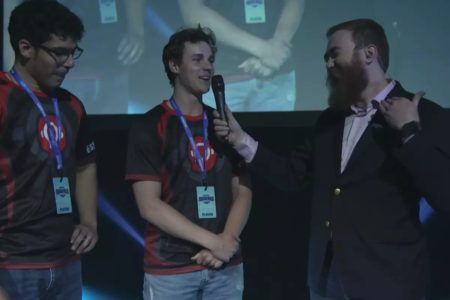 Someone over at Epic Games must be wincing.

Two Fortnite: Battle Royale players from the University of Georgia, Jack Stuttard and Ibrahim Diaz, called out the developer over its controversial balance changes in a speech following their victory at the Collegiate Starleague (CSL) Fortnite finals.

Stuttard and Diaz went undefeated throughout the 2018-2019 CSL Fortnite season and took that momentum to the LAN Finals in Atlantic City, New Jersey. After sweeping both the semifinals and grand finals against players from the University of British Columbia to take the title and US$6,000, the duo took the stage to not only accept their prize but to also speak their mind on how Epic has handled Fortnite’s competitive balance.

“We don’t really like the game that much anymore. Not gonna lie, we’ll see what happens,” Stuttard said. “Epic is kind of messing around a little bit with the way they are balancing everything.”

When the pair was pressed for a better answer by the host, Diaz responded by revealing that they have “decided we don’t want to play competitive Fortnite anymore”.

“We’re just gonna move on to different games or probably do some different stuff,” added Diaz.

The duo later said that they had called Epic out during their victory speech in an “attempt to improve a game [they] loved” in an interview with Motherboard following their victory at the CSL.

Stuttard added that he’ll be going back to casually playing League of Legends until a new game that he likes to play is released.

Diaz and Stuttard’s criticism of Epic’s handling of Fortnite’s competitive balance comes after the developer released a controversial blog post that stated they wouldn’t revert siphon and material changes or bring back stretched field of view (FOV), but will continue making huge gameplay changes around the game’s tournaments.

READ MORE: A ‘Shadow Bomb’ is sneaking into Fortnite soon

The developer has long been criticized by the Fortnite community for its questionable decisions that seemed to ignore the game’s budding esports scene, such as the addition of the overpowered Infinity Blade right before the US$1 million Winter Royale tournament in December last year.

However, the rift between Epic and the competitive Fortnite community grew to its widest after the the former introduced controversial gameplay changes in the v8.20 and v8.30 updates — specifically the reduction of health, shield, and material drops from eliminated enemies (also referred to as siphons) and the locking of vertical FOVs for all players, respectively.

Those changes notably spawned the ‘Revert!’ movement in the Fortnite community, which has continually called upon the developer to revert the changes they made to the game. However, Epic stood by its decision, saying that it “[aims] to provide a fun game that’s inclusive of all players, and provides everyone with a real chance of winning”.

The developer reasoned that the controversial changes were made with the greater part of the Fortnite community — made of millions of newer and casual players — in mind, who they claim found the game “too intense to be enjoyable”.

Epic said that addressing the needs of both the competitive and casual sections of the Fortnite community is a “unique balancing act”.

“After all, those players are the audience for Fortnite competition, and their engagement is key to the growing opportunities for competitive players,” said Epic.

With that said, Diaz and Stuttard’s comments are a sign of continued dissatisfaction among many professional Fortnite players. Having a disgruntled competitive community is not a good sign for Fortnite’s lofty esports aspirations, even as the US$30 million Fortnite World Cup Finals inexorably looms closer.

“I was not intending to be ungrateful or distasteful at all. I was just being honest when asked how I felt about the game,” said Stuttard.