What on earth is ‘Dota at Ako’ and why is Netflix sharing karaoke videos?

No, Netflix was not hacked. 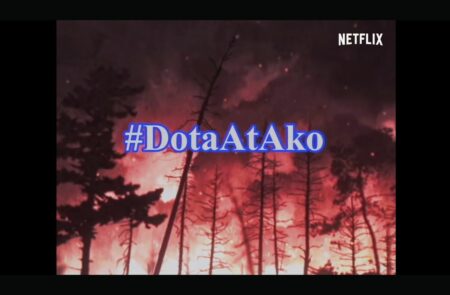 No, Netflix was not hacked.

Yes, all those gimmicky, meme-y, outdated special effects are on purpose.

This video was part of Netflix’s campaign to market DOTA: Dragon’s Blood in the Philippines.

With Dota being such a popular game in the Philippines, there is an ongoing joke about how some gamers are so obsessed with the game that they’d actually choose to play instead of spend time with their significant others. This actually inspired a rap song titled “Dota O Ako? (Dota Or Me?)”

The original track was a comedic song by rapper Aikee and singer Vanessa.

In the song, Aikee’s onscreen girlfriend Vanessa is furious with his addiction to Dota that she asks him to choose: Dota o ako (Dota or me)? The video was done in the style of campy karaoke videos, with the two artists in school uniforms. The song went viral and was often heard in local computer shops circa 2011.

The lyrics have Aikee talking about how amazing he feels when he plays the game, while Vanessa asks in the chorus:

Which will you choose, Dota or me?
Which do you prefer?
When you’re with me, I know that’s the only thing on your mind

Which will you choose, Dota or me?
What am I to you?
What’s important to you? Do you really love me?

Ten years later, Aikee and Vanessa have graduated from school and have taken their relationship to the next level – marriage!

Vanessa still asks, “Dota o ako?” to which the sequel now answers “Dota At Ako (Dota and me)”, showing that a love for the game and love for the girl can coexist. Aikee’s words now reassure viewers that he has made the right choice and that his commitment is unwavering… to Dota! But it seems as though Vanessa now also shares the same sentiment and has also turned into a Dota fan. The two have taken their relationship and their fandom to the next level by watching DOTA: Dragon’s Blood on Netflix.

The video was shared on Netflix’s social media platforms and reached over four million views, with fans commenting how nostalgic the video is.

Does the video have you reminiscing about your after-school days at computer shops too? Or are you still shaking your head with the guy flapping his arms and breathing fire over the flowers?