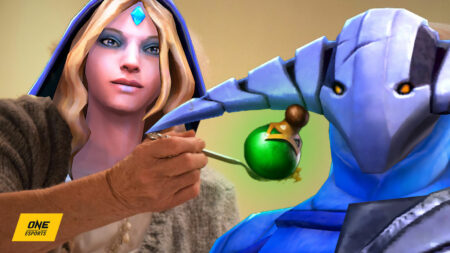 Those words quickly became the rallying cry of several safe and offlaners to their supports over the past patch, who salivated at the prospects of not buying their own regen, and instead amass stat items.

While objectively the right play, pro teams practically abused the strategy, so it was still an annoying time to be a support. But as of 7.31d, that is no longer the case. Healing Salves now only have half duration when cast on an ally, effectively halving their effectiveness.

Buy your own Healing Salves or risk losing the lane in 7.31d

This nerf will likely improve the stock of healing heroes like Enchantress, who can provide healing to their cores, effectively boosting any net worth discrepancy that arises between opposing cores.

This Healing Salve nerf will give supports more opportunities to get their own items, likely rotating quicker and earlier. It’s not uncommon to see supports buy two or three salves in the first few minutes purely to spoonfeed allies. That money can now go to earlier Boots of Speed, or more Sentries for de-warding battles.

Tangoes are still a viable option to feed your core, but the charge-based and cooldown system means that it’s far simpler to divvy up regen instead of channeling all support money into Salves. Also, it’s far slower, so getting your own Healing Salve is much more effective in situations where you are otherwise pushed entirely out of the lane.

Being able to use Salve on an ally remains edge-case useful, such as when Oracle wants to pump out healing during False Promise—which is effectively a small nerf to the hero. Also, players can still attempt to save an ally with its small burst of health.

But more importantly, cores will now have to buy their own consumables for the lane, especially after the slight nerf to the popular Bracer’s health regeneration. We could see cores revert to rushing a Ring of Health or Helm of Iron Will for sustain, particularly on heroes with high base damage that can lane without pure stats for a few minutes.

READ MORE: All qualified teams for TI11 via DPC points