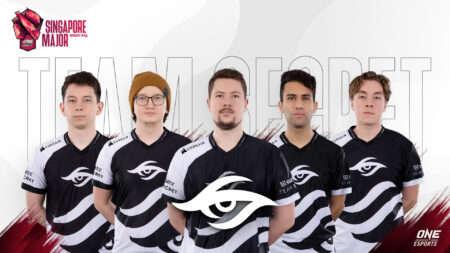 The ONE Esports Singapore Major’s Playoffs kicked off today. With the conclusion of the Group Stage, we are now down to 12 teams.

On Day 1 of the Playoffs, we saw why Team Secret and Evil Geniuses are favored to win the Singapore Major. Team Secret halted Thunder Predator’s momentum by knocking them down to the lower bracket, while Evil Geniuses defeated top-ranked SEA squad Fnatic.

Evil Geniuses came to Singapore prepared and played a near-perfect game against Fnatic to start the series. Artour “Arteezy” Babaev on the Juggernaut dealt way too much damage for Fnatic to handle, which gave EG the 26-minute Game 1 victory.

In the second game of the series, Fnatic surprised fans with a Techies pick. Fnatic hoped to control the lanes by using Techies’ Blast Off ability, but EG played cautiously in the early game and gave Arteezy all the space he needed to secure his farm on the Naga Siren.

Fnatic attempted to delay the game using Techies’ Remote Mines, but Arteezy used his Naga Siren illusions to push the lanes and take down Fnatic’s Radiant base.

Evil Geniuses have advanced to the upper bracket quarterfinals where they will face Invictus Gaming. While Fantic will face OB Esports x Neon in a lower bracket elimination match on April 1.

The first game of the series came down to a battle between two hard carry illusion heroes. Invictus Gaming went with Phantom Lancer, while Vici Gaming chose their tried and tested Terrorblade pick.

Yang “poyoyo” Shaohan’s Terrorblade took the early game farm lead, but Invictus Gaming’s superior draft allowed Jin “flyfly” Zhiyi to catch up. Once both players met in team fights, VG had no way to deal with IG’s Phantom Lancer and took the 1-0 lead.

Vici Gaming evened the series 1-1 when they out drafted Invictus Gaming with their Juggernaut and Lycan picks, which demolished their enemies’ back-line support heroes.

Invictus Gaming advanced to the playoffs’ quarterfinal when Zhou “Emo” Yi took over the final game against Vici Gaming. Emo on the Templar Assassin finished Game 3 with a perfect 15/0/8 KDA record and deleted VG’s heroes during the last moments of the match.

Invictus Gaming will face Evil Geniuses, while Vici Gaming drops to the lower bracket where they will play Team Liquid in an elimination match tomorrow.

Thunder Predator were eager to take on their next big challenge in Team Secret. However, the European juggernauts showed why they’re considered the favorites of the tournament, outmaneuvering Thunder Predator around the map.

Thunder Predator attempted to take control of the Radiant base, despite being behind by 16,000 gold. However, after their timing push was repelled, Team Secret coasted to a Game One victory.

Team Secret finished Thunder Predator off in the second game of the series when Secret went with a surprise Abbadon pick for Lasse “MATUMBAMAN” Urpalainen, who earned a 9/1/16 KDA.

Virtus.pro had a slow start to the first game as PSG.LGD took a small lead in the laning phase. But while PSG.LGD kept looking to initiate team fights, VP helped Egor “Nightfall” Grigorenko get enough space to get farm all over the map. This gave Nightfall a huge lead in net worth on his Juggernaut towards the late game.

However, PSG.LGD’s draft of heroes with strong team fight ultimates proved to be the tipping point for the Chinese squad. This gave Wang “Ame” Chunyu enough time to catch up to Nightfall’s farm. And once Ame became the superior carry hero in the game, it was just a matter of time until PSG.LGD won the first game.

In the final game of the day, PSG.LGD went with the same strategy and constantly looked for clashes around the map. With Death Prophet, Puck, and Tusk controlling VP’s heroes, Ame was able to deal huge amounts of damage. And each time VP lost a team fight, they doubled down and used their buybacks, which set them back further.

PSG.LGD will face Team Secret in the upper bracket quarterfinals next. Meanwhile, Virtus.pro continue in the lower bracket where they will go up against Quincy Crew in a win or go home elimination match.

READ MORE: I asked 537 analysts and fans to predict the Singapore Major Playoffs – by Noxville