Here’s what happened in every game played today. 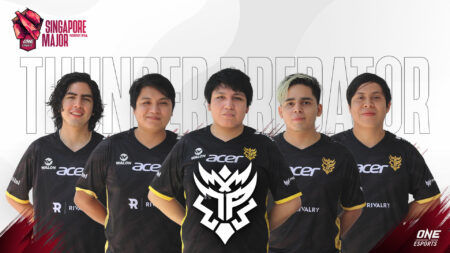 Day 1 of the ONE Esports Singapore Major has concluded with the most unlikely of outcomes. Thunder Predator, South America’s lone representatives, are on top of the standings with four match wins, and a perfect 8-0 record.

In second place, there’s a five way tie between PSG.LGD, Quincy Crew, Team Aster, Team Liquid, and Vici Gaming, who all have one win, and 2two draws.

Meanwhile, top-ranked European squad Alliance struggled in the first day of the group stage securing only one win, tying them with OB.Neon Esports in seventh place.

OB.Neon’s team fight-centric drafts just didn’t cut it against Quincy Crew, who played a standard style of competitive Dota 2. Quincy Crew were able to roll through OB.Neon’s punches in the early game, and then took control in the later portions of both games to secure the clean sweep.

Quincy Crew was in complete control of the first game of the series securing the mega creep advantage against Team Liquid. However, after a few misplays, Michael “miCKe” Vu picked up a Divine Rapier on his Sven and pulled off the biggest comeback win of the Singapore Major thus far.

Quincy Crew bounced back in Game 2 and did not make the same mistakes, which gave them a draw against Team Liquid.

OB.Neon scored a huge upset in the group stage when they defeated Team Aster in Game 1. OB.Neon’s Io and Death Prophet pick overshadowed Team Aster’s Anti-Mage strategy, and this earned the Filipino squad their first win of the tournament.

Unfortunately for Neon, Team Aster went back to their comfort picks in game two, using team fight-centric heroes to even the series 1-1.

Vici Gaming edged out Alliance in Game 1 by using even more team fight-oriented heroes and shut down their enemy’s core heroes.

However, Alliance regrouped and secured their first win of the tournament with key performances from Gustav “s4” Magnusson and Nikolay “Nikobaby” Nikolov.

Team Liquid played their typical fast-paced style against South American giants Thunder Predator who instead opted to draft bigger carries. Unfortunately for liquid, they kept missing their timing windows and weren’t able to keep up with TP’s damage, who cruised to victory in both late games.

Alliance open with a cheese S4 Alchemist to feed Monkey King and Ember Spirit early Aghanims but were torn to shreds during the midgame as TP just did not give the Europeans any space.

Both teams opted for more standard team comps in game 2, but TP looked to have the better overall team chemistry going into team fights and Alliance had no way to stop their BKB Black Holes as the game went on.

With a Terrorblade to fall back on, LGD were prepared to go into the late game if Aster were able to get their Troll Warlord pick online. That never happened however, as LGD brought the fight to Aster instead, quickly taking game one.

In game two, Aster opted for a Monet Specter and White Album Storm Spirit, two mobile late-game monsters that LGD had no answer for. A last-ditch effort from LGD saw Ame pick up a Divine Rapier but everyone on Aster was far too tanky for it to be effective and the series ended in a draw.

Liquid steamrolled Vici’s lineup, which relied on Anti-Mage to do the heavy lifting. Applying constant pressure, Vici were crippled in both farm and map control as they funneled all their resources into an AM that just never came online.

Vici opted for Wraith King in game two, another hero that needs time to come online. Liquid repeated their aggressive style but this time they also had superior AOE team fight control. It looks like Vici didn’t take the hint from game one.

Aster were not prepared for the Thunder Predator pain train as they opened with a greedy Lycan + Phantom Lancer duo. Mnz on his signature Ursa ran at Aster with no fear whatsoever, confident that Mjz was ready to use False Promise if necessary. Things took a turn when Xxs finished an Aghs on his Lycan, further boosting Monet’s offensive power with Wolf Bite. This power wasn’t enough as TP abused the ability’s long cooldown and ended any chance of an Aster comeback.

Aster didn’t fare any better in game two, as Thunder Predator once again thrashed their lanes and dominated the mid-game with their organized aggression.

Quincy Crew showed fans what NA Dota is capable of in their first match against Wild Card favorites Vici Gaming. Singaporean stand-in Wilson “Poloson” Koh Chin Wei was a standout for Quincy Crew as he popped off with his Tusk plays, leading QC to victory in game one.

However, Vici Gaming managed to pull off an impressive comeback during the second game when Zeng “Ori” Jiaoyang’s Void Spirit landed a huge three-man stun, and Quincy Crew were forced to call GG with no buybacks remaining.

After their crushing defeat against Thunder Predator, Team Liquid looked much better in their second match of the day, taking game one against PSG.LGD in dominant form with Tommy “Taiga” Le’s Tiny initiating and setting up great team fights.

However, they couldn’t keep the momentum up, as PSG.LGD got their revenge in the second game after Wang “Ame” Chunyu’s Troll Warlord wreaked havoc during the late game.

While Game 2 saw a better early game start from OB.Neon, Vici Gaming was simply unstoppable with their combined AoE power during the late game.

Thunder Predator finished the day with another incredible win, as they obliterated Quincy Crew in both games of their series.

Whenever Quincy Crew initiated surprise attacks and teamfights to their advantage, Thunder Predator managed to turn the tides to their favor, with Position 1 player Mnz always leading the way.

Farmer Ame came back with his Troll Warlord pick during PSG.LGD’s match against OB.Neon. Pretty similar to their strategy during their earlier series against Team Liquid, Ame racked up all the monster kills and completed his main items early, which gave OB.Neon a hard time during the late game.

OB.Neon took the Troll Warlord pick on the second game and looked much better during the early game, however multiple misplays cost them their lead, and they ultimately went down 0-2.