RNG advance to the Upper Bracket Finals of CDA-FDC

Is RNG the 4AM superteam’s kryptonite? 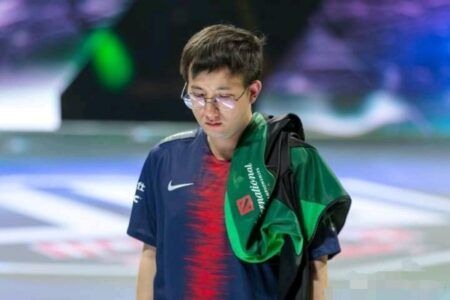 Royal Never Give Up (RNG) dominated the Four Angry Men (4AM) superteam, 2-0, in their Upper Bracket semifinal matchup at the CDA-FDC Dota 2 Professional Championship Playoffs.

This is the second time that RNG has 2-0’d 4AM, the first being in their previous meeting of the tournament in the Group Stage, which was also 4AM’s debut as a team.

Despite their previous loss, 4AM was still perceived as the better team after they defeated EHOME and Team MaGma to top their group while RNG only managing to place third. The latter then breezed through Team Aster in the first round of the Upper Bracket to get their second shot at taking on the Chinese superteam.

In the first game of the series, RNG outdrafted 4AM and blitzed to a commanding early lead. Carry player Wang “J” Wenjun on Phantom Assassin scored a Rampage just 15 minutes in, with offlaner Sun “Srf” Runfa following up with a Triple Kill just moments later.

RNG made the most star-studded team in China look like a bunch of amateurs as they closed out game one in 32 minutes, with J notching a game-high 14 kills against just one death.

4AM put up a better fight in game two, as they were able to hold off another dominant start from RNG to give Zhang “Eurus” Chengjun’s Monkey King enough time to lead a potential comeback in the late game.

However, 4AM botched what could have been the game-winning base push despite Eurus having the Aegis of the Immortal and a 6,000 net worth lead over J’s Faceless Void. RNG took advantage of 4AM’s blunder to kill four of their heroes, push back towards their Ancient, and take the series after 40 minutes of action.

J notched a series-high 15 kills to go along with 14 assists against just two deaths in game two, while Chong “FelixCiaoBa” Wei Lun also had a standout performance on his support Rubick with a 11/2/21 KDA.

With their victory, RNG advance to the Upper Bracket Finals against PSG.LGD, who are looking like the best team in China with 4AM continuing to be underwhelming.

Meanwhile, the superteam will have to fight for their tournament lives against Invictus Gaming in the Lower Bracket.

READ MORE: The EPIC League will replace the OMEGA League for Season 2