The EPIC League will replace the OMEGA League for Season 2

Can Team Secret end the year with yet another win? 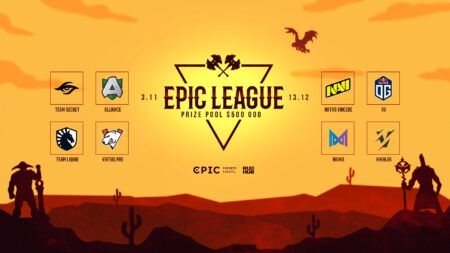 Epic Esports Events has announced that they will no longer be hosting Season 2 of the OMEGA League this upcoming November, instead replacing it with their own tournament: the EPIC League.

Epic Esports previously hosted the first season of the OMEGA League alongside WePlay! Esports back in September, though the former has apparently opted to host their “own flagship” instead of working with other organizers.

The EPIC League will largely follow the same format that was previously announced for OMEGA League Season 2, with the event featuring two divisions for the Europe and CIS regions from October 29 to December 13.

The EPIC League will begin with Open Qualifiers from October 29-30, with Closed Qualifiers following soon after from November 3-11.

The number of participating teams for the first division of the league has been reduced from the initial 12 in the OMEGA League Season 2 announcement to just 10 squads.

The participating teams for the first division of the EPIC League include OMEGA League Season 1 champions Team Secret, OG, Team Nigma, Alliance, Team Liquid, Vikin.gg, Virtus.pro, and Natus Vincere. They will be joined by two more teams from the Closed Qualifier.

Meanwhile, the second division of the league will play from November 11 to December 1, with the Playoffs scheduled from December 8–13.

As with the initial announcement from OMEGA League Season 2, the total prize pool for the EPIC League will be US$550,000. The first division will give away US$500 000 while the remaining US$50 000 is allotted for the second division.

With both The International 2020 (TI10) and the Dota Pro Circuit (DPC) delayed until next year, the EPIC League should hopefully prove a worthy substitute for top-tier competition.

READ MORE: RNG and EHOME breeze through the first day of Playoffs at CDA-FDC