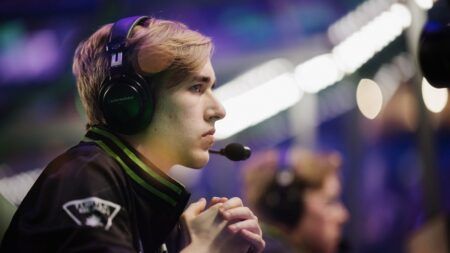 Update May 12 12:20 p.m. GMT +8: TSM’s offlaner Jonáš “SabeRLight-” Volek tested positive for COVID-19 and will be rejoining the team as soon as he recovers. Meanwhile, Quinn will take over the midlane, while TSM’s midlaner Jonathan Bryle “Bryle” Santos De Guia will play the offlane.

Quinn “Quinn” Callahan will be joining his North American rivals, TSM, temporarily for the Stockholm Major.

The substitution was announced this morning by the player’s own team, Quincy Crew. However, TSM has yet to make an announcement confirming that one of its players will be missing the tournament.

This marks the third team that will be playing with stand-ins during the ESL ONE Stockholm Major, after Ukrainian organization Mind Games and European squad OG.

The Major also saw the total number of teams reduced from 18 to 14 after four Chinese teams —PSG.LGD, Team Aster, Xtreme Gaming, and Royal Never Give Up — found themselves unable to travel out of China for the competition.

Quinn will play for TSM at the Stockholm Major

Since Quinn plays mid exclusively, it’s most likely TSM’s Jonathan Bryle “Bryle” Santos De Guia who will be missing the competition. The roster will probably see a direct substitution between the two, though things could change with a potential announcement.

You can watch the Stockholm Major live on ESL ONE’s official Twitch stream. During the group stages, multiple streams will be running on the B and C streams to cover every game.