Vici Gaming will now face Gambit in the Lower Bracket Final for a chance to play EG in the Grand Final. 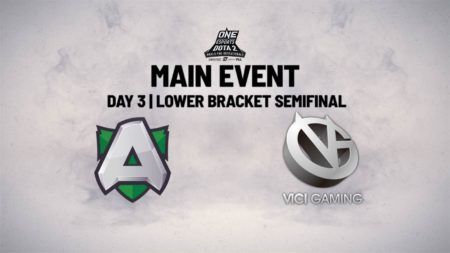 The final series of the day saw European team, Alliance, take on the last Chinese squad left in the tournament, Vici Gaming.

Both teams battled in a best-of-three match for a chance to face Gambit in the Lower Bracket Final.

VG decided to go with the first picked Doom Bringer for Zhou “Ori” Jiaoyang in their lineup. Then, they picked up the Blood Seeker and Gyrocopter for Zeng “Ori” Jiaoyang and Zhang Eurus” Chengjun.

Meanwhile, Alliance decided to go with Puck for Linus “Limmp” Blomdin as their first hero on the middle lane, along with a Morphling for Nikolay “Nikobaby” Nikolov. Their last pick for the game was a Clockwerk for Neta “33” Shapira.

Ori’s Blood Seeker gave VG a commanding lead right at the start of the game by outperforming Limp’s Puck in the middle lane. Alliance’s early game got even worse with 33 and Nikobaby’s lanes struggling against VG’s lineup.

Ori and Yang were able to dominate their lanes, keeping Alliance from gaining any ground.

With no-one from Alliance able to contest him, Ori’s Blood Seeker managed to reache 900 movement speed and zipped through Alliance’s lineup.

Alliance tried to defend their side of the map, but once Eurus decided to join the team fights, the European squad fell further and further behind.

Xiong “Pyw” Jiahan on the Winter Wyvern landed clutch Winter’s Curses and Cold Embraces all game long. Limmp ran way as far as he could, but VG’s heroes were able to chase him down wherever he went.

VG decided to try their luck with their own Puck, but this time gave it to Pyw as their support hero. They also went with the Slark in the middle lane, and a Timbersaw for Ori in the safelane.

In response, Alliance decided to go with the Magnus as their first hero. They added the Beastmaster and Ursa as their core heroes, along with a Skywrath support hero for Simon “Handsken” Haag.

Ori at the bottom lane demanded a lot of Alliance’s attention, and this gave VG’s support heroes the opportunity to stack neutral camps for Eurus to keep up with Limmp’s Magnus.

Alliance was able to answer back by playing patiently during a bottom Dire tier-one Tower fight, where 33 was able to use his Primal Roar to shut down Ori. This lead to Alliance chasing down the remaining VG heroes for the team wipe.

After their successful defense, Alliance began to play more aggressive and contested VG’s side of the map. Limmp was able to catch two of VG’s heroes in his Reverse Polarity. This gave Nikobaby the chance to stack Fury Swipes on enemy heroes and take down four Radiant heroes.

After getting a timely Double Damage run on Eurus’ Slark, VG decided to take a fight and Alliance decided to meet them at the top lane. But Eurus’ Slark was able to build up a ton of Agility thanks to his Essense Shift ability and Alliance were forced to retreat.

Eurus was then able to force Adrian “Fata” Trinks’ Disruptor to waste his Static Storm ultimate and Fata eventually went down. A greedy Eurus then decided to go for more kills, but he aggressively Pounced into the waiting arms of Nikobaby’s Ursa.

Knowing that they still had a distinct team fight advantage, Eurus decided to buyback and extend the team fight into the Dire base where VG was able to take down 33, Nikobaby, and Limmp.

With their 2-0 victory, Vici Gaming advance to the Lower Bracket Final where they’re set to face off against Gambit Esports in a best-of-three match.

The winner will go on to the Grand Final where they will take on Evil Geniuses.

After losing their Losers’ Semifinal match to VG, Alliance exit the tournament in fourth place and walk away with US$50,000.