Vici Gaming will now face Alliance for a spot in the Lower Bracket Final. 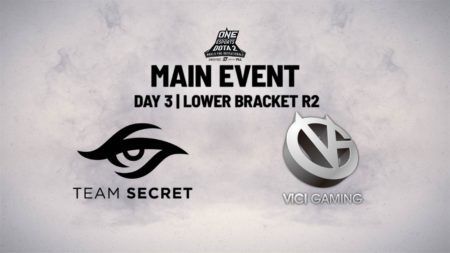 On Day 3 of the ONE Esports Dota 2 World Pro Invitational, Vici Gaming came out on top against top European squad, Team Secret, in one of the most exciting matches of the tournament.

The teams traded games in two nailbiters before Vici ran away with game three in what turned out to be the fastest game of the tournament.

Secret opened the series with an Anti-Mage pick for Lasse “Matumbaman” Urpalainen, with Michal “Nisha” Jankowski on a mid Viper and Ludwig “zai” Wahlberg on an offlane Earthshaker to back him up.

VG countered that with a midgame-centric tri-core of Razor for Zhang “Eurus” Chengjun, a mid Pick for Zeng “Ori” Jiaoyang, and Timbersaw for Zhou “Yang” Haiyang.

VG got an early kill on Matumbaman, but he ended up scoring five of Secret’s 10 kills by the 15-minute mark — most of which were on VG’s cores.

Secret continued to rack up pickoff after pickoff, which gave them the confidence to attempt to claim Roshan early.

VG finally showed signs of life when Secret went for Rosh, with Eurus notching a Triple Kill, leading his team in driving Secret away from the pit and claiming the Aegis for themselves.

While Secret were still able to score some core kills afterwards, the VG teamfight deathball was beginning to come online.

VG cemented the comeback after a huge clash in the Dire jungle at the 33-minute mark, walking away with the upper hand and the momentum.

While Secret tried to get back into the game, VG’s lineup was too powerful at this point, and even a Divine Rapier pickup by Matumbaman at the 48-minute mark couldn’t stop the VG deathball from giving the Chinese team the win in game one.

Secret looked to bounce back in game two with a last pick Windranger for Nisha, with Matumbaman on Morphling and zai on Timbersaw to round out their mobile, high-damage tri-core.

Meanwhile, VG drafted a strong teamfight composition fronted by Eurus on Troll Warlord and Ori on Viper, with Yang on Omniknight to shield them during clashes.

VG came out of the laning phase with a slight lead, as Secret primarily postured defensively to ensure that their Morphling had enough farm coming into the midgame.

VG held map control and were eager to use it to claim Roshan, but Secret contested their attempt and got away with a teamwipe and the Aegis for Matumbaman.

Secret looked to push their advantage by pushing up to VG’s base from the top lane, but the latter was able to pop the Aegis and take down Matumbaman a second time.

Secret didn’t let that slow down their momentum, however, as they found the opportunity to take down Eurus in a fight at the Dire jungle that forced VG to hole up in their base.

They were able to kill Eurus again in the Radiant jungle soon after, but VG’s carry questionably bought back to chase down his killers. Secret was able to turn around and kill him during the pursuit, which forced the GG from VG not long after.

Secret picked up Morphling for Matumbaman again in the decisive game three, though they chose to partner it with Nisha’s Shadow Fiend in an unusual core duo. In what seemed like an attempt to shore up that shaky draft, zai was put on Centaur Warrunner to tank for his squishy cores.

Meanwhile, VG ran one of their signature high-damage, mobile tri-cores in Slark for Eurus, Puck for Ori, and an offlane Doom for Yang to close the series out.

Secret’s weak draft was exposed early by VG, as the Morphling pick guaranteed they’d lose out on the laning phase which threw off the Shadow Fiend from being able to snowball effectively. That only gave VG free rein to hunt for kills to go on a roll themselves.

Secret tried to make as much space as they could for Matumbaman to farm and give the team a fighting chance, but that left Nisha vulnerable to getting taken down multiple times.

VG smelled blood in the water, as they hunted Secret down to force them to concede the series. After botching a gank that led to them feeding away more kills instead, Secret tapped out at the 18-minute mark — by far the quickest GG call of the tournament.

Meanwhile, Secret bow out at 6th place with US$20,000 in consolation despite being previously coming in as one of the favorites to win it all.