VG will now face Evil Geniuses in the Grand Final. 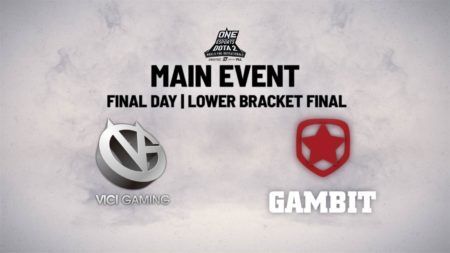 The final day of the ONE Esports Dota 2 Singapore World Pro Invitational kicked off with the Lower Bracket Final between Vici Gaming and Gambit Esports.

To start the first game, Gambit went with a lineup designed with wombo-combo potential in mind with Naga Siren, Dark Seer, and Disruptor. The team hoped to set up a Song of the Siren into Vacuum and Static Storm to win team fights.

In response, VG decided to go with heroes that dominate lanes and hoped to shut down their opponents early in the match. The team went with a Templar Assassin, Leshrac, and Omniknight as their core heroes.

VG made an emphasis on defending the bottom Radiant Jungle to shut down Maxim “Shachlo” Abramovskikh’s Dark Seer during the laning stage. As the game progressed, Zhang “Eurus “Chengjun was able to take the top spot of the net worth chart with his Leshrac, who kept putting pressure on Kiyalbek “dream” Tayirov’s Naga Siren all over the map.

VG took control of the game by winning the laning stage and transitioned into taking complete map control from Gambit. This gave the Chinese team free reign to farm uncontested and even takedown Roshan for themselves.

After killing Shachlo’s Dark Seer outside the Dire base, VG decided to turn up the pressure, and started sieging Gambit’s tier-three Tower and Barracks.

Gambit attempted their wombo-combo play on Zeng “Ori” Jiaoyang and Eurus, but they didn’t have enough damage to pull it off as Zhou “Yang” Haiyang’s Omniknight was able to keep VG up. With three heroes down, Gambit were forced to call GG at the 25-minute mark.

VG decided to go with another group of safe heroes for their game two draft. They had Yang play the offlane Night Stalker, Ori on the Kunkka, and Eurus on the Drow Ranger.

Gambit went with a Morphling on dream, Beastmaster on Shachlo, and a Puck on Danil “gpk” Skutin for the middle lane.

Gambit had a better start to game two with both gpk and dreak taking the top spot of the last hit and deny score for the first 7 minutes of the game.

Gambit tried to take control of the bottom Radiant lane and jungle again. This meant Xiong “Pyw” Jiahan on the Tiny was able to get key rotations on the other Gambit heroes around the map.

Gambit was constantly forced to retreat during night time because of Yang’s Night Stalker who had an Aghanim’s Scepter. Eurus and Ori were able to pickoff the enemy support heroes when Gambit was attempting to disengage.

With a 15,000 gold lead, VG decided to siege the dire base and took down the top and middle lanes of Barracks. Eurus’ Drow Ranger was able to shoot down the Dire structures from a safe distance with his Hurricane Pike.

Gambit made an attempt to get back into the game with a smoke gank in the Radiant jungle, but this ended up backfiring on them when gpk’s Puck went down.

VG quickly claimed Gambit’s last lane of Barracks, but this opened them up to a three-man Dream Coil from gpk who spammed his Phase Shift ability to deal an insane amount of damage.

With Gambit barely hanging on, VG were forced to regroup. However they quickly reestablished map control and claimed the Aegis of the Immortal, Refresher Shard, and the Aghanim’s Blessing for Ori’s Kunkka. This unlocked the hero’s Torrent Storm ability and gave VG more team fight control, which they used to end the game.

After their 2-0 victory, Vici Gaming completes their impressive Lower Bracket run and advance to the Grand Final, where they’re set to face Evil Geniuses in a best-of-five match.

Gambit Esports exit the tournament in third place and walk away with US$60,000 for their efforts.