Both teams remain in last place in Group B. 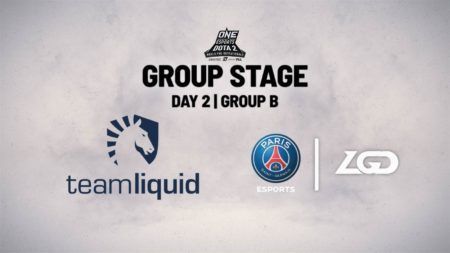 PSG.LGD and Team Liquid, two teams desperate for wins to advance to the Main Event faced off in a best-of-two Group Stage match on Day 2 of the ONE Esports Dota 2 Singapore World Pro Invitational.

Team Liquid squandered their early game advantage against PSG.LGD and lost game one, but they were able to bounce back in game two and finished ended the match with a 1-1 draw.

PSG.LGD decided to go for the Morphling and the popular Magnus mid pick for Lu “Somnus” Yao. Meanwhile, Team Liquid went with Weaver, Shadow Fiend, and Legion Commander as their core heroes.

Team Liquid completely dominated the first 20 minutes of game one, while PSG.LGD continued to make uncharacteristic mistakes like teleporting late to help their teammates.

Team Liquid was able to amass a 9,000 gold lead and a 21-2 score advantage against their opponents before the 20-minute mark of game one.

After getting a quick pick-off against Michael “miCKe” Vu’s Weaver, PSG.LGD began their comeback by eliminating Team Liquid’s isolated heroes. Somnus’ Magnus took control of the game with his Skewer ability buffed by an an Aghanim’s Scepter. He was also able to set up an amazing Reverse Polarity ultimate that caught the enemy Legion Commander.

Team Liquid immediately lost their gold lead and with no Black King Bars or Linken’s Spheres on their core heroes, PSG.LGD demolished the Dire defenses and completed an incredible comeback.

After their disappointing game two loss, Team Liquid chose to draft a Bristleback, Leshrac, and Keeper of the Light. Meanwhile, PSG.LGD went with Shadow Fiend, Legion Commander, and a last picked Slark for Wang “Ame” Chunyu.

PSG.LGD decided to have three heroes at the bottom lane to make sure Ame had enough support and have a good laning phase. Instead, miCKe on the Bristleback was able to dominate the lane with his Quill Spray ability.

Tommy “Taiga” Le was able to get multiple neutral creep stacks for his team during the first 10 minutes of the game, This gave his team a slight gold and experience advantage over PSG.LGD.

Team Liquid took advantage of Ame’s Slark, who decided to farm a Shadow Blade as his first item. With Team Liquid’s heroes rotating as a group, Ame wasn’t able to isolate any of the Dire hero supports and this put PSG.LGD behind.

Team Liquid didn’t waste their mid-game advantage and made sure they wouldn’t make the same mistakes that cost them game one. The European team was able to isolate PSG.LGD’s core heroes and immediately went for key enemy buildings. Team Liquid finished game two after winning a convincing team fight right outside the Radiant base.

With the match ending in a 1-1 draw, both teams remain at the bottom of Group B with 1 point and a 1-5 record.