Daryl “iceiceice” Koh has amassed a vast collection of expensive and rare Dota 2 items throughout his career.

The accomplished Singaporean pro has been competing against the best Dota 2 players in the world since 2011. He has also attended nearly all The International tournaments — except for TI7 and TI11 — as well as Valve-hosted events, where the most exclusive in-game items can be obtained.

While streaming on Twitch, iceiceice shared with his viewers what he believes are the most valuable and expensive items he’s picked up in his 11-year pro career.

The most expensive Dota 2 items in iceiceice’s collection

It’s no surprise that two items that made it on iceiceice’s list are exclusive offlane hero collectibles: Genuine Axe of Phractos and Genuine Guard of the Red Mist for Axe.

According to Steam’s Community Marketplace, the Genuine Axe of Phractos has gone up in price, for one had recently sold for US$564. Axe’s Vanguard back shield has also increased in value, fetching up to US$285.

When it comes Dota 2 hero sets, the 32-year-old mentioned that his Darkclaw Emissary set for Dazzle and Alpine Stalker set for Ursa would fetch a pretty penny.

A Darkclaw Emissary set is currently on sale on the marketplace for US$1,000, but the last one that was purchased only went for US$344 a month ago.

The item that could earn the veteran Dota 2 pro a hefty sum is the Alpine Stalker set, even though iceiceice thinks it isn’t as rare as the other items in his collection.

“I think the Ursa set is really expensive, but nowadays it’s kind of common,” he said. However, the last Alpine Stalker set was sold for a whopping US$1,200 according to the marketplace. 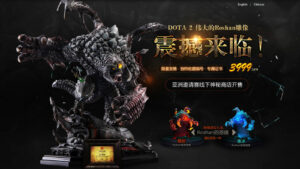 Out of all the items in his collection, iceiceice believes that his Genuine Ice Baby Roshan is his most expensive.

The exclusive courier was once considered the most sought-after in-game item in Dota 2. In 2014, Valve and Perfect World sold a limited-edition Roshan Statue at the Dota 2 Asia Championships. Each statue came with a unique collection number and promotional code that buyers could use to obtain Roshan’s Gift in Dota 2.

Players that opened the special treasure box received one of two Baby Roshan couriers, a Lava Baby Roshan or an Ice Baby Roshan. Both couriers were immortal in rarity, and had constantly increased in price.

However, the item has since dropped in value, with the most recent Genuine Ice Baby Roshan courier sold for US$477, according to the marketplace.

READ MORE: Iceiceice: ‘After what happened with Team SMG, I’m going to take a break’