But will it work? Here’s what we think. 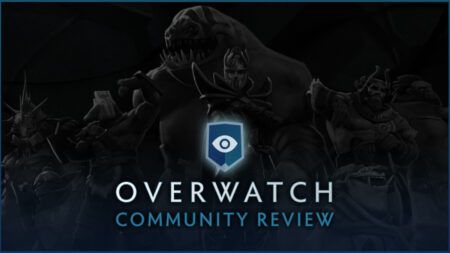 As gamers, we all know what it’s like when someone on the team is being excessively toxic and just difficult to play with. It is absolutely frustrating and it usually leads to a terrible experience overall. But should players who actively ruin games in ranked matches be given more severe punishments?

Well, Valve believes so, which is why it has announced a brand-new Overwatch community review tool that aims to “help the community regulate negative behaviour amongst its ranks.”

How does it work?

The Overwatch system was first released by Valve in Counter-Strike: Global Offensive to give the community an outlet for catching suspected cheaters in the act. Players would watch reported players’ replays and judge for themselves if the suspects were guilty or not.

For Dota 2, on the other hand, Overwatch will be targeted at players who have been reported for “disruptive actions within games.” If you decide to review a case, you’ll have to watch a replay with pre-marked sections indicating possible negative behavior by a specific player. After reviewing all the presented sections, you will then select either “guilty”, “not guilty”, or “insufficient evidence for either.”

Not all players will be eligible for the Overwatch system. According to Valve’s post, reviewers will earn an accuracy score for their efforts, while those who falsely convict will receive a lower score, eventually losing the ability to participate in Overwatch at all.

How do you report players?

You can report players for disruptive behavior during a match via the scoreboard, or by selecting a player and clicking the flag on their hero portrait. These reports will act as indicators to show where and when they disrupted the match. You can also report a player as many times as you like — meaning the more accurate reports you file, the more evidence Overwatch participants will have against the suspect.

How is this any different from the reporting system Dota 2 has now?

This isn’t the first time Valve has tackled players’ toxic behavior in Dota 2. Just last year, so many players were exiled from matchmaking because of excessive individual reports. Even pro players received bans.

Nuengnara “23savage” Teeramahanon and Timothy “Tims” Randrup’s main accounts were even banned all the way up until 2038.

What happens to guilty players who get exposed by Overwatch?

Here’s the thing, Valve’s post doesn’t explain what happens to players who get convicted by the Overwatch system. After seeing how bad Valve’s first attempt at punishing toxic players was, they knew they had to change it. Overwatch now aims to be more precise in judging players, instead of having to be spammed with reports of bad behavior.

Well, the Dota 2 community is in agreement that this system should have been in place years ago. A number of new players have shared their stories about trying to learn how to play Dota 2, but they soon lost interest after horrible early experiences with toxic players.

As long as the Dota 2 community takes the system seriously, it could force players to be more mindful of what they say and to not throw their games. But, judging by how the community is reacting to the announcement, there’s a chance this new system might not work.

READ MORE: This is the best possible Dota 2 lineup according to the DPC