The TI10 champs have some radical ideas. 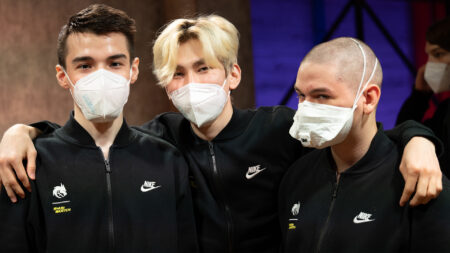 Dota 2 7.31 has an official date—February 23—and fans are already preparing themselves for the inevitable scream of delight and furious scrolling when the patch drops.

Even The International 10 champions themselves aren’t immune to the hype. Team Spirit talked with its players and coach, asking their opinions on the current patch, and what changes they would like to see in Dota 2 7.31.

Offlaner Magomed “Collapse” Khalilov believes that Weaver is the king of all trades. His versatility, scouting ability, and Roshan aiding potential have led to his overwhelming popularity in the pro scene.

Collapse suggested the Shukuchi cooldown could last longer, or cost more mana, in order to make the slippery hero less survivable. He also suggested that Weaver’s The Swarm should also scale its hit per level, akin to something like Grimstroke’s Phantom’s Embrace—to make the hero less annoying in lane.

The captain’s idea was to introduce a notification system, identifying which side of the river a power rune could spawn. This could allow teams to plan ahead of time, preparing resources for what could be a game-changing rune.

Miposhka also wanted to add a vision-granting neutral item, allowing players to gain temporary high ground vision. With how important vision is, this will need to come with massive drawbacks or will become one of the game’s most powerful items.

Yatoro wants to nerf every offlaner

Illya “Yatoro” Mulyarchuk is tired of losing his lane. The hard carry called for a nerf to practically every meta offlaner, and a buff to the underutilized Juggernaut.

When asked which heroes he considered imbalanced, Yatoro rattled off a list of Beastmaster, Outworld Destroyer, Slardar, Night Stalker, Mars, Underlord, and Axe, prompting an exasperated Collapse to point out that Yatoro just wanted his lane to become easier.

Yatoro argued that it didn’t make sense that the safe lane is now often the harder lane, due to the relative early game strength of most offlaners compared to carries.

Silent wants to add synergies like in Auto Chess

Spirit’s coach said that it would be cool if certain heroes, like Clockwerk and Timbersaw, could gain a small perk if they are close together. This would be similar to the Synergies system in Dota Auto Chess, or the Traits system in Teamfight Tactics.

If you think Dota 2 could do with some trimming of the fat, Alexander “TORONTOTOKYO” Khertek doesn’t agree with you.

While the midlaner liked much of the current patch, including the terrain and items, he believed that more changes should be introduced. A map change will make studying the map more interesting, and having more items means players can make more plans about the games and its heroes.

Fans who want to watch more banter between the TI10 champs, and even more drastic ideas can watch the full 15-minute video from Team Spirit here.

Team Spirit will be playing the Winter Regional Finals from February 18 to 20. Having gone through the DPC 2021/2022 Eastern Europe Division I Tour 1 undefeated, there are high hopes for Spirit to continue their dominance—before, perhaps, some of their ideas will find their way into IceFrog’s list on February 23.