We thought it was all over at 44 minutes. 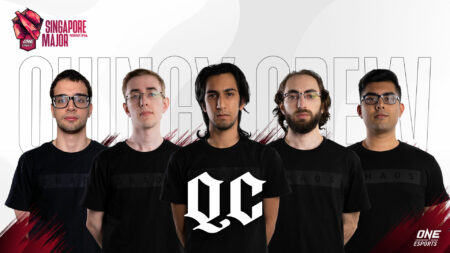 Halfway through Game 1, Team Black N Yellow were controlling the tempo of the game and had a networth lead over Quincy Crew.

After losing their barracks at the 44-minute mark, things were looking all but over for Quincy Crew.

In a typical game of Dota, once a team loses their barracks and has to deal with mega creeps it’s just a matter of time until the losing team gets overwhelmed and either concedes or loses their Ancient.

However, Quincy Crew defied the odds in this particular game and began to fight back.

With each pick off, Quincy Crew’s heroes grew in networth and picked up crucial items that suddenly nullified esK’s backline Storm Spirit play. Now it was Black N Yellow who were on the backfoot even with the mega creep advantage. Their burst strat had been busted.

At 66 minutes, Quincy were had all the momentum on their side. Threatening to end the game with a big push in the top lane, things had to play out perfectly for Black N Yellow if they were to survive the incoming onslaught. Quincy were well prepared for the teamfight and practically claimed the Dire base as their own. Sitting on an 80k networth lead, their heroes were impossible to bring down.

Losing the five-on-five engagement, EternalEnvy had to make a critical game-deciding decision. In a desperate attempt to end the game himself, he teleported into Quincy Crew’s base and focused the Ancient.

In a hilarious game of keep away, Quincy Crew did everything in their power to stop Envy’s siege. Ultimately it came down to Avery “SVG” Silverman’s (tagged as LoA for this particular match) Winter Wyvern to deny Envy the win. Equipped with a Ballista, SVG kept knocking Envy out of range with his right clicks, allowing his teammates to come in and end the king’s reign.

If you missed out on catching this gem of a game live, go back and watch the VOD on the Official Twitch stream. We promise you won’t be disappointed.