Biggest twist of the MCU. 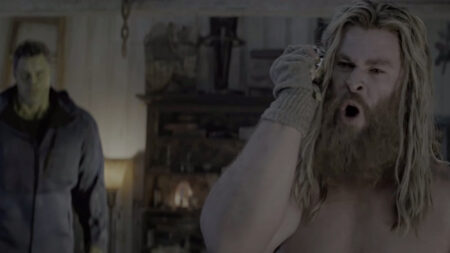 One of the best parts of Avengers: Endgame was an overweight Thor verbally sparring with his Fortnite nemesis, the mysterious “NoobMaster69”.

If you’ve forgotten, here’s a reminder:

Three years later, the identity of NoobMaster69 has finally been revealed in a new Xbox Game Pass trailer promoting Disney’s upcoming The Falcon and The Winter Soldier series:

After helping Captain America and Black Widow and then destroying Thor online, NoobMaster69 a.k.a. Aaron has moved on to working as an Xbox sales associate. The advert shows him assisting winged superhero Falcon catch up on the gaming world after he got blipped out of existence by Thanos in Avengers: Infinity War.

Aaron then points to the new Xbox Series X|S and the two start playing games until Aaron finally reveals his gamertag.

Aaron later claims his cousin is the one who came up with the tag.

Falcon’s MCU actor, Anthony Mackie, also opened up a bit about his retro gamer side, saying that he would immediately catch up on Madden and NBA2K games if he’d ever be frozen on a block of ice for several decades or blipped for five years.

“It’s more so about catching up on the sports games because you have the ability to talk trash with camaraderie,” Mackie explained in an interview with Marvel.com.