Can your PS5 or Xbox Series X do that? 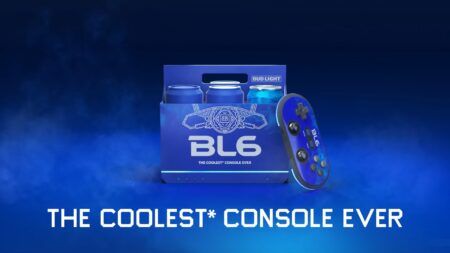 There’s a new contender in November’s much-hyped video game console wars… sort of. Just hear us out with this one.

American beer brand Bud Light has introduced the BL6, a custom-designed console that can run modern games like Tekken 7 and Soulcalibur VI while also chilling not one, but two beer cans.

Designed to look like a Bud Light six-pack, the game system actually has some pretty decent components under the hood:

The form factor is also more than just a gimmick. Two of the built-in “beer cans” actually house the system’s cooling fans, while the middle two slots are designed to hold the custom-branded 8Bitdo N30 Pro+ game pads.  The two remaining slots are koozies dedicated to chilling your beers.

Sure, the Bud Light BL6 is more of a marketing stunt than anything else, but it’s a fun one. The Bud Light team is well aware of it, too, dubbing the BL6 as “The beer koozie console that nobody was waiting for.”

Friday nights will never be the same again.

To Bud Light’s credit, the company is using the BL6’s novelty for a good cause. A limited number of systems are being sold via auction on ShopBeerGear.com, with all proceeds from the sales intended to be donated to a charity benefiting restaurant workers affected by COVID-19 layoffs and business shutdowns.

READ MORE: Japan has made Gundam models you can control with your mind