Japan has made Gundam models you can control with your mind

Are you ready to sync with your mecha? 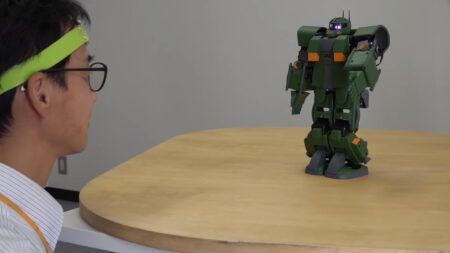 Good news, mecha anime fans. Japanese research company NeU, a joint venture between Tohoku University and Hitachi, has developed a way to control a Gundam model with your mind.

The researchers utilized a small Zaku Gundam robot from Bandai’s Zeonic Technics line, equipped with programming and robotic features. While the robot can actually be manually controlled by an app, the people at NeU modified the robot to be controlled by brain activity.

As a company that specializes in “brain science” and technology, NeU used its ExBrain measuring device as a controlling headband to the mini-mecha. In the video, you can see a test subject syncing up with the robot with some deep breathing and then controlling the arms with its mind.

While it may seem like anime magic, the app clearly shows the process of the ExBrain device. Measuring such things as blood flow changes and head movement, the headband can transmit a signal to the robot to move specific joints and such.

Though the Zaku robot is mainly used for educational purposes, NeU’s prototype is definitely opening up the future for bigger mechas that we can control via brain waves.