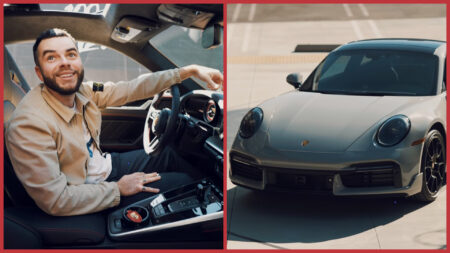 Matthew “Nadeshot” Haag has levelled up tremendously over the last few years.

From working at McDonald’s, to earning multiple awards as a Call of Duty champion, the esports icon continues the grind as the CEO of his own lifestyle and esports organization, 100 Thieves.

Though the player-turned-CEO is now shaking hands in business deals, Nadeshot keeps in touch with his fanbase by posting personal content on his own YouTube channel.

Nadeshot explains how he finally got his hands on his dream car, the 2022 Porsche 911 Turbo S

With Porsche only manufacturing a limited batch of Turbo S models every year, Nadeshot spent over a year and a half trying to get an allocation at an official dealership, which he considered to be “half the battle”.

Interestingly enough, he mentioned that getting a Turbo S is quite difficult if you haven’t purchased any Porsches in the past, but in his case, he found the right contacts to seal the deal for him.

According to the official Porsche website, Nadeshot’s new whip is worth at least US$207,000.

“It’s just a dream come true. It’s my dream car and I finally have my hands on it,” said the 100 Thieves CEO.

The exterior of the car Nadeshot praised the array of customization options that Porsche provided when he was ordering the car.

The 911 Turbo S rocks a chalk-white paint job that showcases different shades depending on its exposure to light, ranging from white to gray.

To complement the overall off-white look, Nadeshot added a high gloss black finish to other exterior parts such as the spoiler, the staggered wheel rims, and the intake vents.

Living in the sunny city of Los Angeles near the Pacific Coast Highway, Nadeshot outfitted the top of the Porsche with a sunroof, and mentioned that he’ll be driving the car daily.

While the car looked pristine from the get-go, he noticed a crack inside the taillight while showing it to the 100 Thieves Valorant team.

“I’m just happy that there’s no external damage so I can’t be blamed for this,” clarified the owner in a lighthearted manner. “It’s not my fault. I know that for a fact.”

The interior of the car 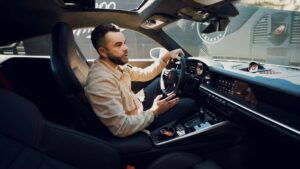 To pay respects to 100 Thieves through the interior design, Nadeshot added a Guard Red coloring to the gauges and deviated stitching, a nice contrast to the black cabin.

Previously owning a Tesla with a touchscreen dashboard, the esports personality loved the more traditional format present in his new Porsche 911 Turbo S.

“There’s a reason why we have dials in a car,” said the CEO. “Everything involved in the driving experience is an arm’s reach away, and I know exactly what I can touch and not touch.”

The performance of the car

As the 911 Turbo S is smaller in size compared to his previous car, Nadeshot described it as the “meanest and fastest go-kart” with an 8-speed PDK automatic transmission.

While it sports a similar acceleration as his former Tesla (0-60 miles/0-97 kilometers in around 2 seconds), Nadeshot firmly believed that the Porsche has a desperate need for speed.

“It’s almost as if the car is just begging you to push it further,” explained Nadeshot. “Once you get above 60 miles, it feels like it’s just getting quicker and quicker.”

Watch Nadeshot’s full reveal of his new Porsche 911 Turbo S down below: