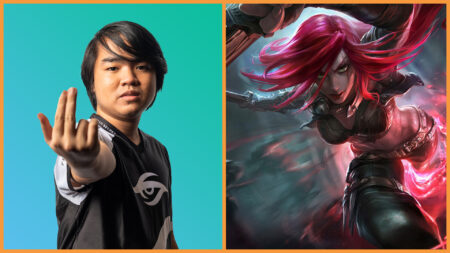 After taking a hard-fought loss against Da Kun Gaming on the first day, Tatsurii and his crew were looking for their first win at the tournament on day two against LATAM team, eBRO Gaming.

Securing game one with a Baron-powered Nexus rush, Secret was ready to close the best-of-three series.

Since eBRO Gaming used their bans to limit the Baron and jungle roles, Team Secret had free rein on what they could slot into the mid lane. Holding the last pick, TS locked in Katarina for Tatsurii.

While this might be his first-ever Katarina game at the global tournament, TS fans know that Tatsurii works wonders on the Sinister Blade.

As of November 2, the Team Secret player holds the top spot on the SEA leaderboard for Katarina, with a 9,322 rating.

Just a minute into game two, Team Secret was looking for every opportunity to get ahead.

Finding Joselo Ezequiel “Ezzez” Rodríguez’s Olaf near the bot side Rift Scuttler, Team Secret engaged. With health bars already low on the side of eBRO Gaming, Tatsurii’s Katarina dove into the fight with Shunpo.

Despite getting caught in Nami’s Aqua Prison, the TS player kept himself in the fight with Kat’s passive, Voracity, which significantly reduces her ability cooldowns upon kills or assists, deals damage as she picks up a dagger.

Staying agile with Shunpo, slashing through eBRO with Kat’s dagger resets, the mid laner picked up an impressive triple kill that earned him enough gold to buy a Haunting Guise in the early game.

Desperate to turn things around, eBRO Gaming stole the Infernal Drake in an attempt to stay relevant in the game, but their exit turned out to be another opportunity for Tatsurii to display his exceptional skills on this assassin.

The Kat expert quickly closed the gap between him and the retreating eBRO players with a Flash-Shunpo combo. Resetting his Shunpo by picking up another dagger, Tatsurii executed his opponents with every consecutive blink, and clocked in his second triple kill of the game.

Racking up seven kills after the punish, the TS mid laner went godlike within the first five minutes of gameplay.

Team Secret secures their first victory as a sweep

Though the mid laner died to a risky base dive in the final fight, the rest of Team Secret pushed hard through the top lane to claim their second and final Nexus of the series.

Tatsurii earned MVP of the game with an 11/2/4 KDA, reminding the rest of the Horizon Cup competition that Katarina is a must-ban when playing against Team Secret.

Team Secret currently holds a 1-1 record in Group B and will face Team Queso tonight at 7:30 p.m. GMT+8 on day three of the Wild Rift Horizon Cup.

You can catch the Horizon Cup action on the official Twitch channel of Wild Rift Esports.