Minions Esports are showing up! 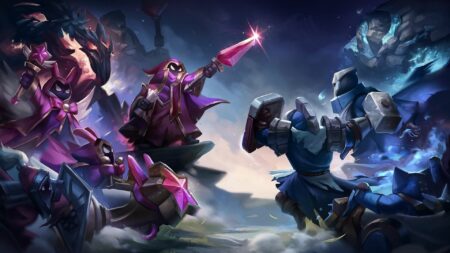 It looks like some teams are getting extra help at the SEA Icon Series Vietnam Fall Season — in the form of minion waves!

Both Saigon Phantom and SBTC Esports won games in the tournament playoffs thanks to some hard-working minions.

In the lower bracket semifinals of the SEA Icon Series Vietnam Fall Season, Saigon Phantom went up against Team Flash in a best-of-five series.

With Saigon Phantom leading the series, Team Flash knew that they had to win Game 4 to stay in it. They took advantage of aggressive ganks by their jungler, Pham “Joyce” Quoc Thang on Kha’zix.

The game looked like it was going Team Flash’s way, for they even managed to push into Saigon Phantom’s base at the 18-minute mark.

However, by the 21-minute mark, minions began breaking into Team Flash’s own base, whittling their Nexus HP down to half.

At 23 minutes, minions hit Team Flash’s base a second time, which got their Nexus health down to about a third.

With that, Saigon Phantom took advantage of Team Flash’s divided focus and initiated a team fight. Team Flash was able to get three kills, but the minions made it back to their base once again and ended the game by taking down the Nexus!

The game eliminated Team Flash from the SEA Icon Series Vietnam, and secured a third-place finish for Saigon Phantom.

SBTC Esports were also helped out by their trusty minions when they went up against Divine Esports in the upper bracket final.

In Game 2 of the best-of-five series, the early game seemed to be in favor of Divine Esports. However, SBTC later gained control and broke through Divine Esports’ defenses.

Divine Esports took a last stand to defend their base, killing all but SBTC’s Phạm “Minas” Minh Phước. As they gave chase to SBTC Minas, they unfortunately left their Nexus completely undefended against super minions!

Two members of Divine Esports went back to the base to take care of the minions, while the rest of the team pushed to SBTC’s base.

It ultimately led to their demise, as the rest of SBTC Esports respawned in time to wipe out Divine Esports and take the game.

SBTC Esports went on to win the series 3-0, and currently hold a perfect record in the SEA Icon Series Vietnam Fall Playoffs.

The grand final between SBTC Esports and Divine Esports will take place on September 1, 2021, at 6:00 p.m. GMT +8. The match will be broadcast on the Wild Rift Vietnam YouTube and Facebook.