These underdogs managed to get a perfect 3-0 score. 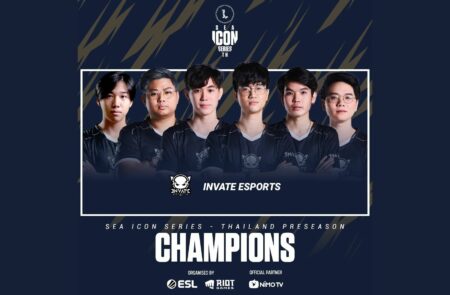 Invate Esports stunned the Wild Rift SEA Icon Series: Preseason Thailand tournament by defeating overwhelming favorites EVOS Esports, who had not lost to any other teams prior to this match. Invate won the best of five grand final series with a perfect 3-0 score to claim the championship.

Invate started the series strong. INV Bellbee on Orianna and INV Syndicate on Vi would boldly initiate fights and INV KazeTARuler’s Draven provided the firepower to follow them up. INV Whatthejes on Alistar sustained the team enough to outlast EVOS even in the closest of clashes, with INV CatType’s Fiora able to solo lanes and fights. This draft set the stage for the type of gameplay Invate would bring to the series, and sealed the first victory for Invate.

Invate chose almost the same lineup for Game 2, although EVOS managed to get Orianna on their side. The teams seemed evenly matched until Invate was able to wipe out EVOS, as EVOS attempted to push into their base. This clash gave Invate the momentum they needed. Winning every team fight from then on, Invate pushed towards victory and took Game 2.

EVOS put up a better fight in Game 3, managing to get Alistar away from Invate. They were able to push back Invate several times, but Invate’s confident teamplays turned the tide by mid game. With INV CatType’s Fiora split pushing to cover more ground, Invate played their cards in exactly the right way to win the series with a perfect 3-0 score.