Impressive’s 5 pro tips to dominate the jungle with Graves 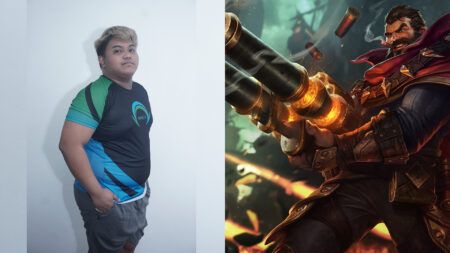 John Lloyd “Impressive” Dela Cruz is a League of Legends: Wild Rift pro player for Omega Esports. Before Wild Rift, Impressive has been a solid presence in the Philippine pro scene, participating in numerous mobile esports titles before including Arena of Valor and Mobile Legends: Bang Bang.

Now he has proven himself to be a must-watch jungler in the Wild Rift scene after Omega Esports won the first-ever Wild Rift: Asia Brawl tournament. His performance was a key factor in their victories over some of the best teams in Asia.

Despite having a large hero pool, Impressive likes to play Graves the most in tournaments. He is currently undefeated playing Graves in competitive play, and most teams have opted to respect ban the Outlaw when facing him.

We asked the man himself for some tips on how to play Graves.

Graves is a strong champion provided the enemy team is not built around magic damage as he can be easily bursted down.

Champions you should avoid when playing Graves are Gragas and Orianna as they deal tons of damage and crowd-control. Basically if the team composition is centered on burst damage, think of other junglers who have sustain and solid escape abilities.

I recommend Challenging Smite because of it can help you secure kills with its damage output, giving you an edge in early skirmishes. Only go with Chilling Smite if you are behind in the early game

Conqueror Keystone is the way to go with Graves. He can easily activate Conqueror because of his abilities. A fully-stacked Conqueror is deadly and really helps in the early game, especially if you time your abilities to get the max stack.

You should aim to finish your core items such as Youmuu’s Ghostblade and Black Cleaver as soon as possible before making big plays in the mid-game.

Since Graves can easily be caught by enemies, I recommend going for Ninja Tabi then Quicksilver. Graves has enough damage as is and going for aggressive enchantments is not worth it.

Phantom Dancer, Infinity Edge and Guardian Angel should also be in your list of must-buys. These items usually are enough to give you the proper offensive and defensive stats coming to the late game.

4. Exert pressure against the enemy jungler

Graves is one of the strongest champions in the early game, so use this to your advantage. Invade the enemy jungler after getting your Red Brambleback. Force a 1v1 all the time and pressure the enemy jungler to play defensively so that your team can get ahead as the game goes on.

5. Be mindful of your bullet count

How you manage your bullets is vital, and skill management is a top skill you have to master if you want to succeed in Graves.

The best combo for Graves would be to proc your first two bullets and use Quickdraw to get another bullet. By the time he is reloading, use End of the Line and smoke screen to dish out damage. Deal the finishing blow with his ultimate, Collateral Damage.

Make sure to stick to walls and stay as close as possible if you want to deal the maximum possible damage. Graves excels in dishing out damage in tight spots because all his bullets can reach you.