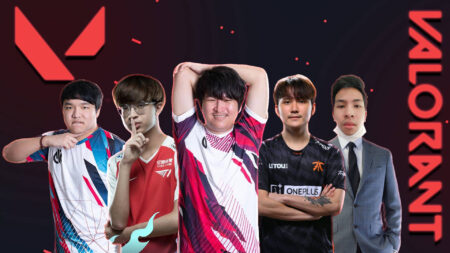 T1’s Nuengnara “23savage” Teeramahanon has revealed on his social media page that he, along with other prominent Thai Dota 2 pros, will be competing in the upcoming Valorant VCT Thailand Stage 3 Challengers Open Qualifiers.

The team will be joining in for fun as the Thai Dota 2 pros jokingly mentioned in their post that they are not entertaining any sponsorship deals because the team could disband at any time.

The 19-year-old Dota 2 pro also playfully mentioned that they “aim to break X10 Esports,” the best Valorant team in the region that qualified through the VCT Stage 2 SEA Challengers Playoffs and competed at VCT Stage 2 Masters Reykjavik.

In the comments section of 23savage’s Facebook post, Fnatic Jabz continued to poke fun at his team’s Valorant skills saying that Masaros’ Sage walls aren’t straight, Toyzakung’s Omen has some not-so-good one-way smokes, boombell doesn’t how to use Viper’s skills, and 23savage’s Reyna fails to shoot at opponents.

The stacked Thai Dota 2 pros will compete from July 31 until August 1. T1, Fnatic, and Motivate.Trust Gaming will all be competing in the upcoming BTS Pro Series S7: Southeast Asia which takes place from August 1 to 15.

23savage, Jabz, and Masaros will be competing in the tournament, which means even if the Thai Dota 2 team advances through the VCT Thai Stage 3 Challengers Open Qualifiers, they will most likely forfeit.