No one expected this 400IQ play. 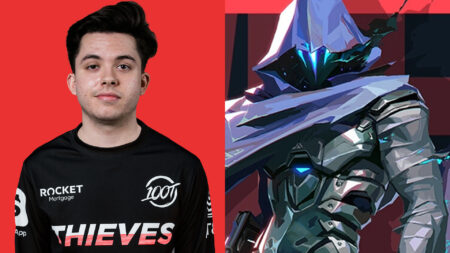 100 Thieves Ethan “nahtE” Arnold surprised his radiant teammates when he stopped a common post-plant molly in a Valorant ranked match.

100 Thieves Ethan shows how to stop a post-plant molly

During Evil Geniuses’ Tarik “tarik” Celik’s Twitch stream, the defenders cleared the A-site on Bind, except for the enemy Brimstone who managed to stay alive.

Hiding in Bath, he threw his Incendiary molly through Omen’s smoke, which would have delayed the spike defuse.

100 Thieves Ethan was one step ahead of the enemy Brimstone however, and called out that he would block off the enemy molly.

He moved his character in front of showers and perfectly blocked the Brimstone molly, which allowed tarik to complete the defuse.

Molly lineups in Valorant are one of the best ways to secure rounds in post-plant situations, but only a few players know that the character models in Valorant can actually body block these projectiles.