The grand final was a classic case of sibling rivalry. 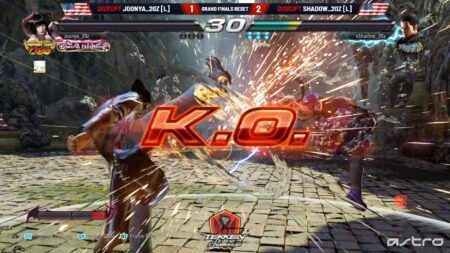 The Tekken Online Challenge showcased its second batch of western Tekken gods in the US Central open bracket.

While most finals appearances are between familiar friends and foes, the US Central tournament featured a sibling rivalry between brothers, Rodney “Joonya” Desjarlais and Marquis “Shadow” Jordan.

Big brother Joonya was able to get the grand final reset with his Jin, but with Shadow shifting gears into Kazuya, the young talent managed to win the reset with a close 2-1 scoreline.

Throughout the grand final, the two players went back and forth with various character changes in between. While Joonya’s Eliza didn’t seem to work against Shadow’s trademark Claudio in game one, he eventually found some luck with Katarina’s cheesy strats.

Joonya’s Katarina was a poking machine, contesting everything that Shadow threw out. When the Claudio player started playing safer than usual, Joonya spammed her elusive lows and even got a du-du brown on both Claudio and Shadow’s new pick of Lee Chaolan.

While Katarina’s strats were effective, Shadow’s Lee was able to tie up the scoreboard. Now onto his other main of Jin, Joonya played more for hard-hitting punishes and, with a beautiful counter-hit trade into a Rage Art, he eventually claimed the reset with a quick crouch punch.

To give Joonya a taste of his own medicine, Shadow switched to a more aggressive and viable pick in Kazuya. Countering Jin’s more defensive style of play, Shadow pumped the aggression with successive pokes and eventually won a trade that led to a deadly wall combo, putting two straight games on the board.

With his back against the wall, Joonya went back to his initial and more reliable pick of Eliza. Shadow was able to tie things up to a final final round, but Joonya easily pulled out Eliza’s salt-inducing slides to bring him up by one game.

Stuck on the Eliza pick, Joonya was helpless in the final game. While he was able to fool Shadow the first few times, his little brother locked him down with some incredible knockdown hits that limited Joonya’s ability to set up his attacks. With just one miscalculated Eliza slide, Shadow punished him with a Devil’s Steel Pedal, winning the tournament with a glorious no-round brown.

With the championship win, Shadow cements himself as the strongest fighter of the US Central region and earns a solid cash prize of US$500. With the online format, Shadow had the chance to double his earning in a Final Boss fight against Jeannail “Cuddle_Core” Carter, but he lost to the Alisa main in a 3-1 scoreline.

The next Tekken Online Challenge will feature the EU Southwest region on November 7-8.