The Alisa player was a definite femme fatale. 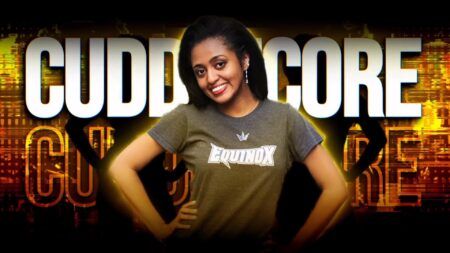 Marquis “Shadow” Jordan may have been the winner of the Tekken Online Challenge US Central open bracket, but the Claudio player faced a Final Boss in Jeannail “Cuddle_Core” Carter who immediately rained on his parade.

Known as the Queen of the Mid-west, Cuddle_Core instantly booted up her Alisa and went to town on the Claudio player. Still trying to get his Claudio skills in check after a long run with Kazuya, Shadow was barely able to keep up with Core’s damage output. With just a simple power crush and a flying robot punch, Cuddle_Core managed to take game one with ease.

With Core’s frequent use of the flying dash, Shadow opted to play safe and sidestep for a solid punish. The Claudio player utilized his sweeping Gravity Zone and grabbed a game with a quick low.

Cuddle_Core eventually pulled through in the third game. While Shadow was able to get the wall-break combo, he left Core in Rage Mode and mindlessly went in for the running punch. With the punch missing by just an inch, the EQNX player popped her Rage Drive to deal some massive damage. Even though Shadow was able to get up and do one low kick, Cuddle_Core instinctively blocked it and punished with a rising kick.

Despite Shadow’s good efforts in bringing everything to a final final round, his Claudio started to fall into Alisa’s backdash trap. With just one blocked Starburst Gravity Zone, Cuddle_Core came back with a Rage Drive combo into a chainsaw combo. Shadow immediately got up and used his own Rage Drive, but Core closed things out with a power-crushing robot punch once again.

With the glorious win, Cuddle_Core stands the Final Boss of the Tekken Online Challenge US Central while Shadow loses his chance to double his championship earnings of US$500.

The next Tekken Online Challenge will feature the EU Southwest region on November 7-8.

READ MORE: JoeyFury brawls out with Marduk in Tekken Online Challenge US East