She even has a Daigo assist! 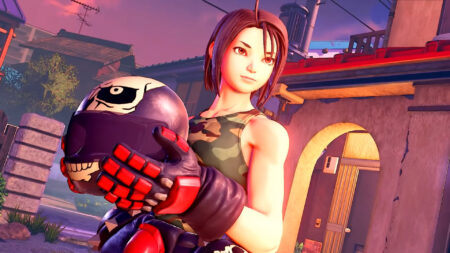 Rival Schools fans, it’s your time to shine! Capcom recently streamed its Street Fighter V: Champion Edition Spring Update, and it included a teaser for one of the game’s most highly anticipated characters, Akira Kazama.

Previously, we explored her history as a playable character in Rival Schools, and are excited to note that her base design hasn’t changed much. Akira’s signature black boots, leather jacket, red gloves, and skull helmet which once hid her gender and true identity can be seen in the teaser trailer.

The video showcases Akira’s moves and combos. In response to the teaser, HiFight posted a comparison between Akira’s air juggle from her original game and her newly designed character model in SFV:CE.

After a pause, when Dan continues to keep her from leaving, Akira also activates what looks to be her V-trigger, summoning her older brother, Daigo, to finish Dan off with an assist attack reminiscent of Capcom’s other fighting games.

Street Fighter V Director Takayuki Nakamaya said that they are still working diligently on her development.

Capcom will be releasing more updates about Akira in the near future. In the meantime, fans can look forward to Rose’s debut in-game on April 19, and Oro soon after.

For more information, you can check out the full Spring Update video.