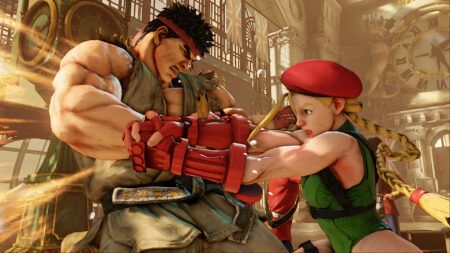 While waiting for players to join his open lobby, Daigo was about to hop out and play ranked matches because of the lack of players. But then a player named Akira joined the lobby. The whole match was translated by YouTube channel FGC Translated.

Daigo immediately recalled a rumor of a young unknown player destroying the top ranked players in Japan — which also includes pro players. Akira is a Cammy main who showed experience and composure that would rival any SFV pro today.

At the start of the round, Akira displayed some early game jitters as he threw a random DP after knocking Daigo down. Akira then proved the rumors about him were true and clutched out a close first round against Daigo. Akira showcased his expertise in spacing and corner pressure by utilizing Cammy’s movement and long range pokes.

Akira then earned an impressive comeback to win in the first game by pushing Daigo into the corner and stunning him for the win. Daigo was even surprised by how much Akira knew about the Cammy versus Guile match-up.

The two played a best-of-five set, with Akira winning the first two games and getting to match point against Daigo. What’s interesting about watching the entire match from Daigo’s perspective is that you can tell he’s slowly coming to understand how to combat his opponents, as he casually talks about normals and frame data on his stream.

Daigo even got hyped while playing against Akira as he won the very last round. Towards the end of the match, he explained, “A talent like this is rare, you can’t find a guy like this that often.”

Since then, Daigo has continued playing against Akira online. Daigo has also taken up an ambassador role for Street Fighter, hoping that more young players will join the scene.

Daigo understands that there aren’t that many young players jumping into the deep end of competitive Street Fighter V. While there are some young players in Japan who have made a name for themselves in the competitive scene — like 21-year old Masaki “Kawano” Kawano who finished in 17th place during the CPT East Asia 1 online qualifier — it’s still extremely unusual to receive such high praise from arguably the greatest player to ever play Street Fighter.

It should also be mentioned that Daigo has a keen eye for talent. He formed his first esports roster, Team Beast, back in 2017 which included Eduardo “PR Balrog” Perez, Keita “Fuudo” Ai, and DC “Infexious” Coleman who are all top-tier FGC talents.

For us who want to learn more about Japanese SFV prodigy Akira, we’re just going to have to wait until the young player decides to pursue a career in competitive play.