The tournament welcomes a month of PUBG action. The biggest PUBG tournament of the year has begun.

The PUBG Global Championship 2021 pits 32 top teams from around the world in a month-long competitive circuit for a chance at the US$2 million prize pool.

Here’s everything you need to know about the PUBG Global Championship 2021, including its schedule, format, participating teams, prize pool, and where to watch.

What is the PUBG Global Championship 2021?

The PUBG Global Championship 2021 is the final event of the 2021 competitive season. Similar to the PUBG Global Invitational.S 2021, PGC 2021 is a LAN/online hybrid event.

The tournament invites only the best regional squads who were top guns in their respective PUBG Continental Series events.

Schedule of the PUBG Global Championship 2021

The PUBG Global Championship 2021 will begin on November 19 with a weekend of Rank Decision matches.

The competition will then see three Weekly Series where teams can potentially secure a grand final slot by winning the Weekly Final.

For teams who weren’t able to secure a grand final slot in the Weekly Series, they will have one last chance to prove their worth in the Grand Survival on December 16, which will determine the four remaining teams for the grand final.

The tournament will then conclude with a three-day grand final from December 17 until 19.

Winner and final results of PGC 2021

After dominating the grand final with four WWCD’s, Chinese team NewHappy was crowned the champion of PGC 2021, and received a cash prize of US$1,378,364.

Here are the complete results of the grand final:

The PUBG Global Championship 2021 will feature 24 days of competition with 145 matches for teams to play. 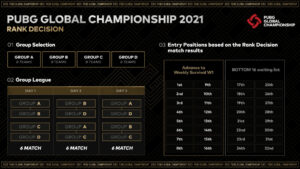 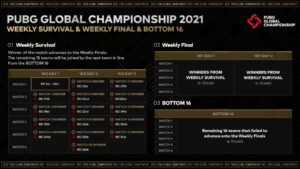 From November 19 to 21, teams will play through Rank Decision matches to determine their positions for the first Weekly Series.

Starting with the Weekly Survival, the top 16 teams will play 16 matches over three days with the Winner Winner Chicken Dinner rule, meaning that the first place team in each match will advance to the Weekly Final.

The remaining 15 teams will continue to play the matches alongside the next team from the bottom 16 squad pool.

The 16 winners of Weekly Survival will compete in a 10 match tournament over the weekend which will follow the Point rule, meaning that teams will accumulate points to get top placement.

The winner of each Weekly Final will be guaranteed a slot at the grand final and will receive a Weekly Winner prize of US$30,000.

The remaining 16 teams that failed to reach the Weekly Finals will compete in the Bottom 16 day. Consisting of six matches, the pre-Weekly Series event will determine the next week’s order for the bottom 16 squad pool.

Once all three Series have been concluded, PGC 2021 will take the three Weekly Final winners and the nine best Weekly Final teams to the grand final and eliminate the 32nd team.

The remaining 19 squads will play through the Grand Survival, a series of four WWCD matches that will decide the last four competitors for the grand final.

The grand final will host the 16 best teams in an all-out weekend to claim the PUBG throne.

The final series will take place over three days with five Point matches per day. The final rankings of the tournament will be decided on the placements from the grand final.

The remaining teams that did not appear in the grand final will be ranked through their Weekly Finals point scores.

For a more detailed explanation, you can check out the official PUBG blog post.

The tournament’s base prize pool is US$2 million with additional prize money worth 30% of PGC 2021 items revenue. The prize pool will then be split amongst all participating teams.

PGC 2021 will also give out special prizes for teams who show exceptional skills throughout the tournament.

Where to watch the PUBG Global Championship 2021

PUBG fans can catch the action on the official PUBG Esports YouTube channel and the PUBG Battlegrounds Twitch channel.

READ MORE: Take on the best PUBG Mobile squads in SEA in the pandapro SEA Cup