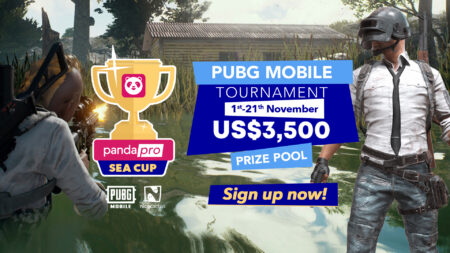 This article is presented by foodpanda.

Think you’ve got the best PUBG Mobile squad in Southeast Asia? Prove it by entering the pandapro SEA Cup, delivered by foodpanda, and you could take home a share of the US$3,500 prize pool!

What is the pandapro SEA Cup?

The pandapro SEA Cup is the chance for PUBG Mobile fans to play like a pro by competing against amateur and pro teams across SEA, all streamed with pro casters from the Semi Finals onward.

The tournament is open to PUBG Mobile gamers in the Philippines, Malaysia, Thailand, and Singapore.

The tournament will comprise of three stages:

Up to 256 teams will enter the first stage. Teams will be split into 16 groups of 16 teams and will play against each other in a 16-squad battle royale format. The top two teams in each group will proceed to the Semi Finals.

For the Semi Finals, the remaining 32 teams will compete in two 16-squad battle royales. The top three teams from each group will proceed to the Finals.

For the Final round, the remaining six teams from the Semi Finals will compete against invited pro teams for the pandapro SEA Cup title and the grand prize of US$2,000.

How to watch the pandapro SEA Cup?

The Semi Finals and Final stages of the tournament will be streamed in both English and Thai and will be available to watch on the Facebook pages of SirCloud and Ffame. SirCloud will stream and cast in English, whilst Ffame will host the Thai stream, casting alongside Zaffer.

All games will start at 8 p.m. in the Philippines, Malaysia and Singapore, and 9 p.m. in Thailand.

How to sign up for the pandapro SEA Cup?

You can sign up to compete at the official pandapro SEA Cup website here. Registration is free and will be open until the day of qualifying, but do note that only 256 slots are available, so make sure you sign up early. Once all slots have been filled, registration will be closed. Please note players will need to set up a Nicecactus profile to enter.