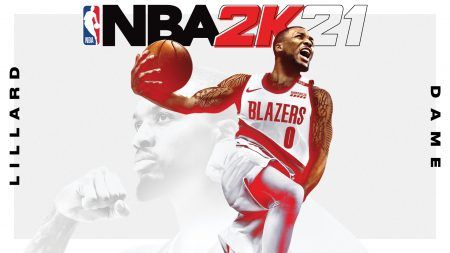 Through this first teaser, 2K Sports is making it quite clear that Dame Dolla is the “Current Gen” cover star — a fitting distinction for the five-time NBA All Star. Lillard’s cover will grace the PlayStation 4, Xbox One, Nintendo Switch, and Windows PC releases of NBA 2K21.

NBA.com reports that two more cover athletes are scheduled to be announced later this week — one for the next-gen PlayStation 5 and Xbox Series X versions of the game, and another for the Legends Edition.

This follows the NBA 2K Series’ now well-established practice of having different superstars gracing different editions of the game. NBA 2K20, for example, had the LA Lakers’ Anthony Davis as the main cover athlete, but also featured the then just-retired Dwyane Wade for the game’s Legend Edition.

With Dame Dolla being dubbed the “Current Gen” star, and the Legend Edition being reserved for icons of the NBA’s previous generations, it’s fair to assume that the other cover variant will allude to the NBA’s crop of emerging superstars.

Someone along the likes of Zion Williamson, perhaps?

As for the Legend Edition, fan speculation is high on the late Kobe Bryant being the featured star. No doubt, it would be a most fitting tribute to the global basketball icon that the world lost way too soon to tragedy.

NBA 2K21 will be available for preorder starting July 2. It will launch October 2020 for the PS4, Xbox One, Switch, and PC, while a release date has yet to be announced for the next-gen PS5 and Xbox Series X platforms.

READ MORE: 10 games we can’t wait to play on the Sony PlayStation 5