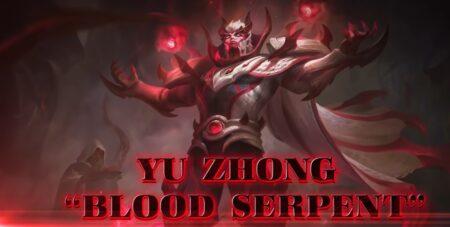 Mobile Legends: Bang Bang has released the teaser for Yu Zhong’s collector skin, Blood Serpent, where he transforms into one of the most manacling heroes in the Land of Dawn.

In the teaser trailer, a burst of energy hits a large obelisk during a solar eclipse, summoning a flying serpent. In this skin, Yu Zhong now wears white and red armor, and a Japanese-inspired kabuki mask.

Red energy emits from his claws with each basic attack. As for his abilities, he now summons a mysterious symbol in the ground whenever he casts Dragon Tail and Furious Dive. For Soul Grip, he unleashes a red serpent instead of a dragon.

His ultimate Black Dragon Form is what makes this skin a collectible. Instead of turning into a dragon, he instead turns into a terrifying white serpent laced with red outlines.

Upon exiting his Black Dragon Form, he transforms into a serpent-human hybrid with enhanced abilities.