Wield the power of sand with Crescent Scimitar Khaleed 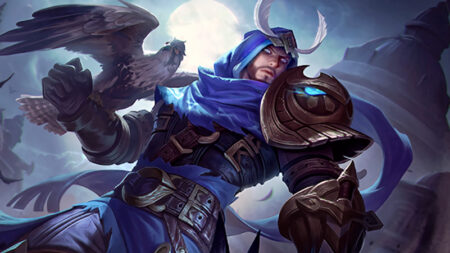 The teaser video features Khaleed wearing a battle-torn blue robe. He also dons heavy leather vambraces and greaves, and holds a small dagger in his left back hand to complete the Arabian assassin look.

One of the best highlights of this skin is his scimitar, which has blue engravings in the blade and an illuminating blue rock at the ricasso.

His abilities do not disappoint, as all of them have been visually reworked to match his skin. Khaleed now slides on purple sand when his passive, Sand Walk, is active, while Desert Tornado leaves a trail of purple and white streaks of light as he whirls his scimitar.

The quicksand that appears under his feet during Quicksand Guard closely resembles a darkish-blue night sky. Lastly, Raging Sandstorm just got a lot more epic as the sandstorm looks like a vast, moving galaxy!

Crescent Scimitar Khaleed is coming soon to the in-game store.