The MPL MY/SG S6 playoff schedule has been announced

Who will be MY/SG’s season 6 champion? 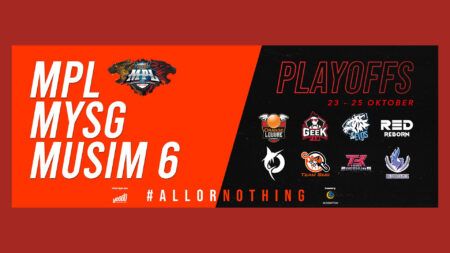 After six weeks of the MPL MY/SG regular season, eight teams are heading into the playoffs.

In addition, to show appreciation to fans and their support for the last six seasons of MPL, Moonton will be fulfilling the wishes of 12 MLBB players!

They have launched an MPL MY/SG “One league, Infinite Dreams” campaign that runs from 15 to 22 October.

All you need to do is leave your MLBB wishes, and your MLBB and server IDs in the comments section of MPL MY/SG’s social pages on Instagram and Facebook.

Tune in to the playoffs livestreams from October 23 to 25 to find out if your wishes were granted by Moonton!

READ MORE: Vote for your favorite MPL MY/SG players in the End of Season Awards