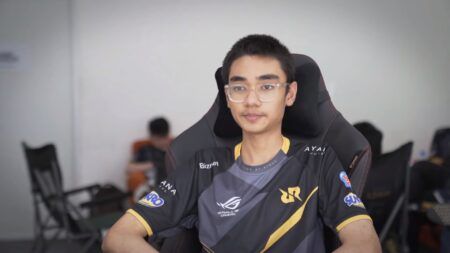 Rumors about Taka leaving BTR for RRQ started when a leak surfaced on Lius Andre’s live stream. When discussing the departure, Bigetron CEO Starlest confirmed the move, but denied it later on.

The potential leak eventually died with RRQ Hoshi focusing on their appearance in the Mobile Legends M2 World Championship.

In the announcement video, Taka admitted that he was first upset about receiving an offer from RRQ. At the time, he was already making rounds as a comfortable reserve player at Bigetron, playing around 19 regular-season games with a KDA average of 6.

As time went on, he finally accepted the deal to take a spot on the Kings of Kings roster. Aside from being interested in seeing how the team works with mainstay superstar Lemon, he has also reunited with his best friend and former teammate, Vynnn.

From the looks of it, RRQ Hoshi has brought in Taka for his role versatility, Initially a mid lane mage user, the new RRQ player dabbled in playing the offlane role and now plays support.

This leaves Lemon in an interesting spot as the team’s original multirole player. Will Taka be able to substitute for Lemon and deliver the same impact in the Land of Dawn? Only time will tell.