EVOS Legends and 10 Second Gaming Plus grab the last two spots in the M1 Playoffs. 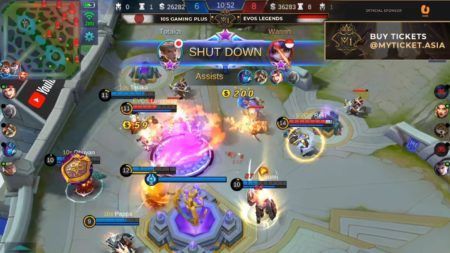 Group D was in action on the final day of the Group Stage of the MLBB M1 World Championship:

Although Onic showed some promise in their defensive abilities during the first game, Evos kicked it into overdrive with a less-than-10 minute game two.

The final nail in the coffin was EVOS’ Donkey’s stunning kick to ly4knu, with Rekt finishing the Filipino player with an auto-attack.

Onic had another tough series in their next match against Japan’s 10 Second Gaming Plus.

Although 10S had the Filipino team cornered in the first game, Onic had an amazing comeback play inside their own base. However, even with the Lord on 10S’ side, the Japanese team could not penetrate Onic’s diehard defense.

Onic’s OhMyV33nus claimed the ace after taking Tomebo down at the border of their base. Although the stall was a huge morale boost for Onic, it wasn’t enough to turn the tide, and 10S would soon secure the win in a few more pushes.

10S gave Onic no chances in the second game of the series. With 10S’ Obuyan using Rafaela, the entire Japanese squad had a universal movement buff that assisted them in map movement.

By the final minute of game two, 10S stormed into their base for one more clash. Pappa picked up a double kill, leaving only three people to defend, and 10S easily destroyed the base inhibitor, completing the sweep and all but eliminating Onic from the tournament.

EVOS kept up their form against Russian team Deus Vult. While DV had a relentless kill advantage in both games, EVOS were able to push through their defenses in the late game to secure victory.

In game two, DV once again had a strong start, but EVOS’ superior team co-ordination let them overpower DV’s defenses.

At the end of the game, EVOS’ Oura solo-killed DV’s XeKa in the bottom lane, letting the rest of EVOS siege DV’s base with the Lord, eliminating three more members before the finish.

10S looked unstoppable in this match, pulling off a number of incredible team wipes.

In game two, by the seven-minute mark, 10S was already sieging DV’s base, with Totaka easily picking up a double kill on LilHappy and Kupie.

Just a minute later, 10S went in for another team-clash, wiping out DV and destroying the remaining towers for complete base destruction.

In what was by far the best match of the day, EVOS took on 10S to decide who would take first place in the group. The Japanese team won a tightly-contested game one, but EVOS came back and took both game two and three.

In the last play of game three, Evos did their best to gank 10S in their own base, but 10S countered the invasion by taking out Wannnn and Donkey.

With both Onic and Deus Vult already eliminated, there was only pride on the line in the last match of the day.

Onic took game one fairly easily, but DV was able to tie up the scoreboard in Game two.

In game three, both teams looked evenly matched until Onic’s OhMyV33nus managed to pull LilHappy out of DV’s base while, in the top lane, Onic’s Dlar dived in to eliminate DV’s Kupie at the same time. With only three DV members left, Onic broke the middle tower and cleared the base inhibitor in no time.

At the end of Day 4, EVOS led the pack with a 3-0 record. They will next face Burmese Ghouls in the Upper Bracket playoffs.

10 Second Gaming Plus qualified in second place with a 2-1 record, and will face off against Malaysia’s Axis Esports in the Lower Bracket playoffs.

Onic PH and Deus Vult have been eliminated from contention.