A thrilling Day 3 saw Sunsparks and Todak advancing to the next round. 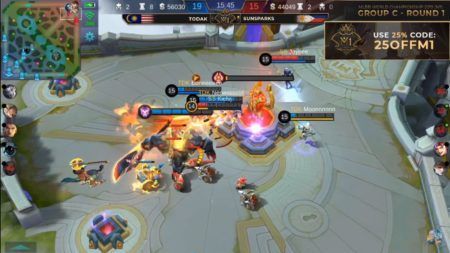 Day 3 of the M1 2019 is in the books! Yesterday, these four teams showcased their mettle in the Group Stage competition:

Here’s what went down:

Game one was an evenly matched, back-and-forth affair. SS focused on taking kills while Todak concentrated on gold and objectives. Momentum swung for the Filipino squad around the 20th minute when they secured the Lord and used it to rally toward Todak’s base. Game one went to SS in 21:52 with Kielvj’s Lunox and Jaypee’s Karrie leading the charge.

In game two, Todak caught SS off guard with their early game aggression. Moonnnnnn’s Kimmy focused on kills while Xrayyyyyy’s Masha and Cikuuuuu’s Helcurt kept downing SS turrets. Todak charged at the Sunsparks base around the 10-minute mark, but SS successfully defended. Five minutes later, Todak regrouped and stole a Level 2 lord, taking full control of the game to even up the series.

Sunsparks switched to an aggressive early game strategy in game three. It paid off right away, as SS quickly dictated the tone of the game. Rallying behind the two-marksman lineup of Kielvj’s Kimmy and Jaypee’s Granger, Sunsparks made quick work of Todak to take the series, 2-1, in just 10 minutes. The game featured this stunning Grock wall charge by Fuzaken which appeared to stun the Malaysian contingent at the six-minute mark:

Todak then faced off against Turkey’s Evil Esports.

In game one, Todak weathered an aggressive Evil Esports attack that focused on kills. In a game that lasted nearly 22 minutes, the Malaysian squad overcame a 9-23 kill deficit thanks to a formidable base defense and patience with objectives to outlast their Turkish rivals. With a Lord fortifying their final charge, Todak secured the impressive game one win.

Todak made sure not to give Evil any wiggle room in game two, going aggressive right out of the gates. Capitalizing on Evil’s lack of ranged attacks, the Malaysian team put constant pressure with their own attacks, with Xrayyyyyy’s Masha and Cikuuuuuu’s Bruno taking point. Todak completed their sweep of Evil Esports with a dominating, 10-minute game two performance.

Brazil’s GeO eSports made their M1 2019 debut in the third series, facing off against the Sunsparks.

Game one was a forgettable performance for GeO, however. The squad from the Philippines outpaced and outclassed the Brazilians using an aggressive attack, despite GeO’s strong lineup and the game was over in just nine minutes and 40 seconds.

Game two was a different story. Relying on a two-mage setup of Homis’ Chang’e and Junn’s Lylia, plus effective Lolita support from Aura, they gave SS a dose of their own medicine with a convincing game two win.

In the deciding game, Sunsparks pulled out a two marksman setup with Kielvj’s Kimmy and Jaypee’s Granger, while Renzio’s Masha led a split push that dealt serious damage on GeO’s defense. As the Brazilian squad struggled to respond against attacks from both sides, Sunsparks pulled off an easy win, wiping out the opposition around the 11-minute mark.

The fourth series of the day saw GeO eSports and Evil Esports going head to head.

In game one, Evil Esports went all-in on each charge, using their full complement of players to overpower GeO eSports in every skirmish. In the process, Evil quickly stacked up their objectives and gold, enabling them to secure an emphatic 22-5 win in 11 and a half minutes.

Game two was almost a mirror image of the previous match, as Evil asserted its dominance again. Despite GeO’s attempts to play aggressive, they were simply no match against Evil’s overpowering five-man ganks. Mocker led the way for Evil, using Harith to deal immense damage as Itachi’s Estes managed his health.

The fifth matchup of the day was between Sunsparks and Evil Esports.

Evil Esports carried its winning momentum into their next matchup, utilizing their dominating five-man attacks to full effect once again. Katze’s Granger led the charge with seven kills and five assists. Game one was over in little more than 10 minutes.

Sunsparks bounced back in game two with a strategy that used Renzio’s Thamuz as a decoy. While drawing Evil’s five-man attacks to the bait, SS focused on their objectives, building towards a powerful final rally led by Kielvj’s Esmeralda with support from Fuzaken’s Grock and Rafflesia’s Kaja. The game ended, 15-8, in 11 and a half minutes.

For the day’s last series, Todak battled against GeO eSports.

Game one leaned heavily in favor of Todak, as the Malaysians played stellar defense against GeO’s attacks while taking down enemy turrets one by one. Game one went to Todak in just nine minutes.

For game two, Todak’s Kimmy and Valir combination — behind Cikuuuuuu and Nenassssss — was maximized to take down GeO’s turrets efficiently. Eoneeeeee’s Grock added firepower in skirmishes, even pulling off an impressive triple kill at one point. Todak dominated once again, ending the day with a 14-minute, 21-6 win.

At the end of Day 3, Todak led the pack with a 2-1 record and 7 points. They will next face Indonesia’s RRQ in the Upper Bracket playoffs.

Sunsparks qualified in second place with a 3-0, but only 6 points, as they dropped three games in total. They will face off against Vietnam’s VEC Fantasy Main in the Lower Bracket playoffs.

Evil Esports and GeO eSports have been eliminated from contention.