The prodigy finished perfect with a 16/0/5 KDA. 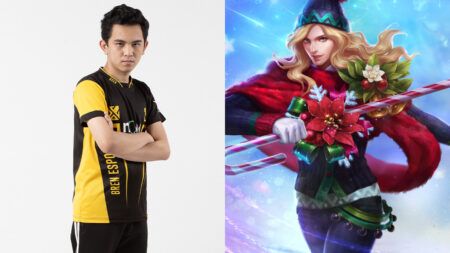 While Bren prides itself on solid teamwork amongst all its roles, the third and final game of the series shined a spotlight on KarlTzy and his polished assassin skills.

The prodigy, on his trusty Lancelot, squared up against Celiboy’s Ling. To counter Alter Ego’s aggressive playstyle, Bren was quick to punish AE at key objectives and feed kills to KarlTzy.

Once his Lancelot was activated, KarlTzy became Bren’s spearhead in catching out-of-position heroes. In one instance, YAM was only a few hits away from death from Bren’s attacks. He was narrowly saved by Celiboy’s Tempest of Blades, but KalTzy didn’t miss a beat and pounced on the Esmeralda player for a killing spree.

Bren then started Lord right after, so Alter Ego forced a clash in the mid lane. This drew the PH squad to abandon the objective and defend mid, but KarlTzy saw it as an opportunity to create mayhem. Acting as Bren’s one-man clean-up crew, he slashed his way through Alter Ego for a flashy triple-kill.

After securing the Lord, he even pulled off an unexpected backdoor! With so much damage on hand, KarlTzy ushered a creep wave and ran straight into their base to claim the reverse sweep over Alter Ego.

In a post-game interview, Bren captain Pheww elaborated to ONE Esports about the dynamic of the team that centers around such a gifted hyper carry.

“He doesn’t really demand that much from us,” said Pheww. “He’s always just telling us what he wants to achieve and that they should look at him when he goes in during engages. He trusts us that we’ll be able to support his actions.”

On his best hero, Pheww believed that KarlTzy was just a natural killer on Lancelot, for his skills are fit for his kind of gameplay as he’s able to get tons of kills without getting caught out by the enemy.

Even though KarlTzy is already a world-class talent in his own right, his performance in this game was a statement to his ability to clutch the W for his team. Racking up 16 kills, 5 assists, and no deaths, KarlTzy is without a doubt one of the best assassin players in the world right now.

Bren Esports will face RRQ Hoshi in the lower bracket final of the M2 World Championship.