Everyone can be a legend. 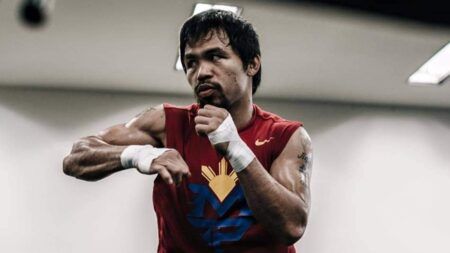 Even before officially announcing him as the game’s newest ambassador, there were already leaks of a new hero that fans claim looks very much inspired by Pacquiao.

His name is Paquito, The Heavenly Fist and he is currently playable on the Mobile Legends advanced server. One fan is even convinced that Paquito’s Jab skill, which throws a powerful left fist against enemy heroes, pays homage to Pacquiao since the boxer himself has dealt finishing blows using his left hand.

When asked if he would have heroes or skins in Mobile Legends soon, Pacquiao asked all his fans and players to wait for official announcements from Moonton.

“All I can say is just watch our for surprises from Mobile Legends and myself ,” said Pacquiao. “I am very much excited as much as everyone else and also very honored to be part of MLBB.”

Partnering with Mobile Legends has been very easy according to Pacquiao since his son, Jimuel, has been playing the game for a while now.

“It was easy for me  to say yes when Moonton approached me to be their Philippine ambassador. I already know of Mobile Legends even before they got in touch because my son Jimuel plays the game on his phone and regularly streams with his friends. So why not be a part of what my son loves?” he said.

Jimuel Pacquiao plays under the username “TheNotoriousOne” and has been playing Mobile Legends for two years already according to an interview with ABS CBN Entertainment.

Manny Pacquiao described being a part of the Mobile Legends family as an “amazing experience.”

“I have seen how much the esports community in the Philippines has grown, how much the gaming community has embraced Mobile Legends: Bang Bang, and, with their skills, have elevated the game.”