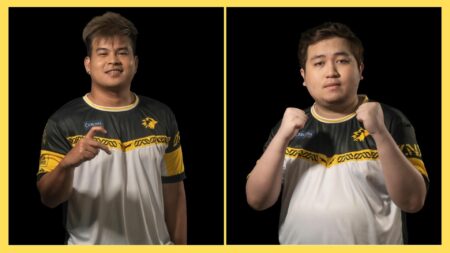 The code has been broken.

Here’s how the combined effort of the yellow hedgehog squad overcame the elusive ‘UBE Strategy’ of Blacklist International.

In game one of the series, ONIC PH went with an offensive-heavy lineup that included Paul Ian “Beemo” Sergio’s Akai.

Akai, a difficult hero to play, proved to be the shining star in the first game as he provided the team with excellent zoning and map control.

How ONIC PH used these heroes to counter the UBE strategy

His Thousand Pounder and Hurricane Dance combo of Akai was always on point, which broke Blacklist International’s UBE strategy as it disrupted their formation in team fights.

It was the same story in the second match, as the combined frontline power of Beemo and support Allen Jedric “Baloyskie” Baloy dismantled the Tier One-backed squad once again in dominating fashion.

This time, Beemo went with another roamer that’s perfect against the UBE Strategy — Jawhead. Baloyskie also picked Selena once more in the second game after a strong showing in game one.

ONIC PH almost lost the game at the 11-minute mark after an aggressive push by Blacklist International in the midlane, but Beemo’s heroics gave them another fighting chance.

A successful Lord at 15 minutes and a four-man wipe by ONIC PH sealed the deal for yellow hedgehog squad, securing an upper bracket slot with a 2-0 win.

According to ONIC PH head coach Paul Denver Lintag “Yebmaester” Miranda, their victory is a lot sweeter this time.

“Every win is important, but defeating Blacklist International is an honor since they are very strong,” he said.

The last time Blacklist International lost in the professional scene was in the Mobile Legends: Bang Bang Southeast Asia Cup 2021 (MSC 2021) against Execration in the grand final.

With the win, ONIC PH will join Blacklist International in the upper bracket for the upcoming playoffs that will begin two weeks from now.