Execration captain E2MAX’s message to the rest of MPLI: ‘For sure, Philippines is the best region’

The EXE captain is proud of his countrymen. 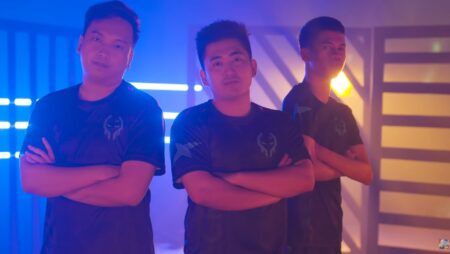 The MPL Invitational will begin in a week’s time, with 20 teams from Indonesia, Malaysia, Myanmar, the Philippines, and Singapore battling it out for a US$100,000 prize pool.

ONE Esports recently caught up with MPL PH team Execration and their captain, Patrick “E2MAX” Caidic, to see how the team is gearing up for the tournament.

Execration are hot off an incredible run in MPL PH S6, topping Group A in the regular season and coming in third in the MPL Playoffs. While the team has had its ups and downs in previous appearances, E2MAX believed that their increased discipline this season resulted in the team’s improved performance.

The team has a reputation for being the bad boys of MPL PH, but E2MAX saw his teammates’ antics as a form of expression. During their third-place playoffs reverse-sweep against ONIC PH, the entire crew popped off with a choking taunt after every victory.

“For me, I just try to be supportive no matter what happens,” said E2MAX. “Even when we’re down 0-2, I do my best to boost morale and tell them that we can win this series.”

The squad went through a soft rebuild with the departure of their two cores, Hate and Bennyqt. While this may be a huge hit to the team’s chemistry, E2MAX said that their newest young recruits, Mark and Kelra, are fitting in just fine at EXE.

“We’ve been focusing on building our team chemistry with the new players,” said the EXE captain. “We know that the supports can definitely guide the core talents so Ch4knu and I can provide a certain support system to buff up our new cores.”

When talking about tactics, E2MAX had some hot takes on what they might pull out at the tournament.

“Support Layla could be a definite possibility,” said the EXE support. “She was buffed to have a longer attack range to the point where she can safely break towers.”

As for specific heroes, E2MAX also shared that Brody will be a go-to ban for the team. He expounded by saying that the ranged hero has a lot of damage in the early game and can easily build like a tank to sustain the lane against other marksmen.

From his own experience of scrimming with other regional teams watching their leagues, E2MAX saw the Philippines as the region with the best playstyle right now.

“The playstyles and meta are advanced here in the Philippines,” stated E2MAX. “While other leagues really go for playing safe and scaling, MPL PH likes to play way more aggressive with lvl 1 fights and such. When it comes down to it, we can adapt any kind of meta with how we’ve been playing.”

In terms of dream match-ups, Execration is ready to put their hopes high for a possible series against MPL ID champions, RRQ Hoshi. E2MAX explained that RRQ’s two-core set-up is something that they’ve been doing in the MPL PH for a while now. With such similarities in play, he’s very interested to see who can dominate with the playstyle more.

E2MAX also praised fellow PH team Omega Esports as the potential dark horse of the MPLI. With his observations, OMG is a disciplined, calculated team that only goes for low-risk, high-reward situations.

When asked to rank the regions, E2MAX did not hesitate to place the Philippines on top.

“For sure, the Philippines is number one,” proclaimed E2MAX. “Bren Esports stands strong with mostly sweeps in the playoffs against big-name teams while you also have teams like us and Omega. Second would be ID with MY/SG in third and Myanmar in fourth.”

With Execration entering the MPLI as one of the lesser known PH teams, E2MAX gave a brief explanation about their motto, #ExeShot.

“While many new fans might confuse the drinking motto with the team not being serious, we believe it’s a good play on words on how dedicated we are to being a top-tier team,” said E2MAX. “We want Execration to be something that you enjoy and can be a part of, like a family.”

The Execration captain concluded the interview with a few words to EXE’s upcoming competitors.

“You may not know Execration right now, but once you see us play, we’ll be stuck in your head forever.”