Dance the night away with this colorful Samba Muse Pharsa skin

It’s a party in the Land of Dawn. 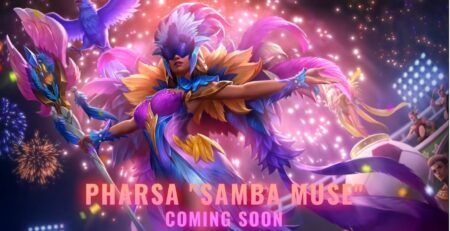 Practice your moves and get your dancing shoes on as Pharsa’s latest skin, Samba Muse, is coming to Mobile Legends: Bang Bang this February.

Based on the teaser released on Youtube, Pharsa will receive a carnival-themed makeover, donning vibrant and colorful feathers instead of her usual monochromatic look.

Her bird Verri will also get a visual overhaul, transforming into a blue parrot that stands tall and proud in Pharsa’s arms.

Being categorized as a Special skin, her abilities will also change to match her lively appearance. Curse of Crow now sends a pinkish-white hue in a targeted area with hints of colored confetti. Purple ribbons will surround marked enemies who are stunned by the ability.

A new carnival-themed map called Grand Mayhem has also been released if fans want to double down on the experience. Staying true to the fiesta-themed inspiration, the map features new and colorful renovations to the turrets, base, Lord area, and jungle.

To all the Pharsa mains, get your wallet ready. The skin will only be available for a limited-time.

READ: Sky Wee’s 5 pro tips to slash your way to victory with Alucard