He took out all the trash. 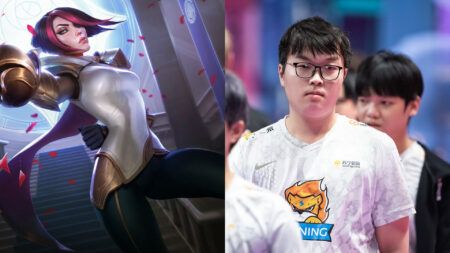 At the League of Legends Worlds 2020 final, LCK representatives DAMWON Gaming were up by one game over LPL’s third seed Suning. After a long 43-minute game one, Suning were determined to stay competitive in the best-of-five series.

In game two on red side, they counter picked in two roles, jungle and top. As a last pick, they put their eggs in the Chen “Bin” Ze-Bin basket by enabling him to go up against Ornn on Fiora, who deals true damage and a percentage of the target’s maximum health.

In the late game, Suning were about 3,000 gold up and had already secured the Cloud Soul. After Jang “Nuguri” Ha-gwon whiffed Ornn’s Call of the Forge God, Suning stepped on the pedal.

As Tang “huanfeng” Huan-Feng opened with Curtain Call and Bin teleported into enemy lines, DAMWON were on full retreat. One by one, they fell to the 5/1/4 KDA, 300 gold bounty Fiora. Procing key vitals and getting Grand Challenge off in the first kill, nothing could stop this duelist.

This is the first pentakill ever in a Worlds final, and Bin’s third highlight of competition after a sleek Irelia 2v1 outplay, and two explosive game-winning Gangplank barrels.

Even though Suning evened out the series 1-1, DAMWON Gaming went on to win the next two games for the 3-1 victory and the 2020 World Championship title.