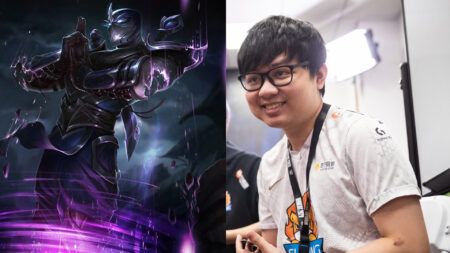 In the clash of LPL vs LPL in the Worlds 2020 semifinals, most League of Legends esports fans favored number one seed Top Esports in this matchup. Suning however, caused a massive upset after defeating them 3-1, proving that they are the true dark horse of the competition.

A key reason why Suning has managed to make it this far, pushing past LPL’s first and second seed from the quarterfinals to the semis, is because of their flexibility in drafts.

Even on jungle Shen, Suning’s jungler Lê “SofM” Quang Duy continues to impress. On red side, the team chose to give top laner Chen “Bin” Ze-Bin the counter pick advantage, and moved Shen to the jungle.

SofM chose to start at his blue buff, and full cleared bot side. Thanks to a strategic trinket ward onto Suning’s red buff, Hung “Karsa” Hao-Hsuan went from buff to buff, stealing it away.

Gaining a good angle onto Bin, Karsa ganked from behind. SofM walked towards top, but since Bin got away and TES did not get anything from the gank, Karsa returned to his jungle.

Intelligently, SofM walked in parallel with him, and dropped a trinket ward on the edge of the blue buff. From this, he could deduce that Karsa was definitely taking Gromp even though he had no vision of him.

Note that he did not drop a ward over the wall at Gromp itself, for Karsa would have spotted it. Instead, he went with a true big brain play that eliminated options for the enemy jungler. If Karsa started blue, then SofM would know. Using Bin’s top lane priority, they would have pressured, delayed, and push Karsa off the buff altogether. But if Karsa was doing Gromp, another opportunity presented itself.

Working with the lane priority Bin established in the top lane, SofM patiently waited, then walked into Karsa’s view when Gromp was half health. Even though Lee Sin had red buff, Shen’s taunt and Twilight Assault chunked out his opponent. He even got the steal in the end!

Knowing that Zhuo “knight” Ding was making his way up from mid lane after pushing in Orianna, the duo had to made quick decisions. Now that Bai “369” Jia-Hao’s Jax and Karsa’s Lee Sin were cornered under their own tower, SofM and Bin executed a perfect tower dive and retreated through top lane, out of knight’s grasp.

Timing is everything in the jungle. In our last interview with SofM, he revealed how he remembers everything from pathing to the precise clearing times and respawn times — a true big brain jungler.

Suning will compete for the Worlds 2020 title against DAMWON Gaming on 31 October, Saturday at 6 p.m. (GMT+8).