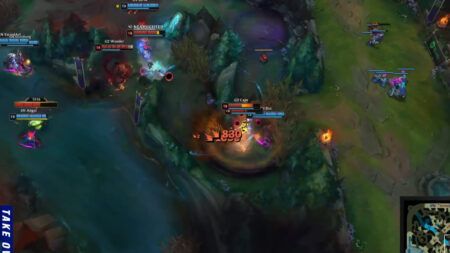 In the clash of Group A teams in the second round robin of Worlds 2020, only two teams could qualify for the quarterfinals. Even though Team Liquid managed to claw back two wins, their 3-3 record and hopes of moving on to the playoffs perished when Suning defeated G2 Esports in the last game of the day.

Tied 4-2, Suning and G2 locked their spot in the playoffs. However, they had to face off again in one last tie-breaker game of the day to determine who would take first and second seed.

It was a long and tense affair. Even though Suning managed to get early leads, they could not end the game. G2 meticulously defended their base, managing and clearing waves, which allowed Luka “Perkz” Perković on Senna to collect more than a hundred souls.

The second win condition G2 had was Infernal Soul. At Soul Point, they gave up Baron to Suning so that they could down one the last elemental drake of the game. Unfortunately, Suning completely cut off their retreat.

As G2 were halfway through dragon, top laner Chen “Bin” Ze-Bin based after pushing top wave, then teleported to bottom lane. As the rest of Suning moved across the map from the left, Bin came in from the right, which funneled G2 into a choke. He dropped his ultimate Cannon Barrage, then perfectly lined up two Powder Kegs that crit for 1,260 and 830 damage respectively.

Even though Rasmus “Caps” Borregaard Winther’s Syndra pushed him away with Scatter the Weak, he flashed back in for another barrel and the double kill onto G2’s carries, guaranteeing Suning’s tiebreaker win.

The LoL esports community couldn’t help but compare this devastating blow to G2’s past Worlds runs where the team also got caught out in crucial game-changing moments. Most notably, they were taken by surprise by fellow LPL top laner Invictus Gaming’s Kang “TheShy” Seung-lok on Aatrox at Worlds 2018.

Group A’s first seed Suning and second seed G2 Esports will compete in the quarterfinals, which begin on October 15.