Even without Nuguri, can anyone stop them? 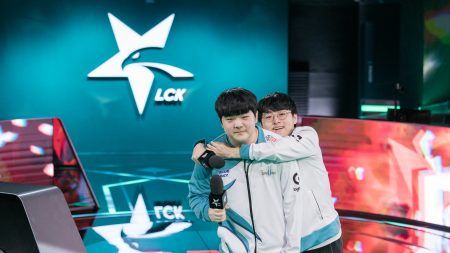 Korean team DAMWON Gaming continues to dominate the world of League of Legends with another championship win at the KeSPA Cup 2020.

Right from the start, DAMWON boasted a perfect 4-0 standing at the group stage and nearly swept Hanwha Life Esports in the semifinal. While fellow Group A team Nongshim RedForce were gearing up for revenge in the final, DAMWON proved to be the stronger, more composed team that swept NS 3-0.

DAMWON started the series with a fairly passive playstyle to bait Nongshim into uneven fights and overextensions. With Kim “Khan” Dong-ha and Heo “ShowMaker” Su playing Mordekaiser and Zoe respectively, the two overpowered and outranged their lanes. They also had solid responses to Han “Peanut” Wang-ho’s roaming Kindred.

With a substantial 10,000 gold advantage and the Mountain Soul, DAMWON finally went on the offensive and hunted down Nongshim on every front. By the 29th minute, ShowMaker and the boys eventually closed it out with a quick Baron rush and a full-squad base attack for the game one win.

In game two, Nongshim started out strong with some low-risk, high-reward engagements. Instead of amping up their offensive efforts, Seo “Deokdam” Dae-gil and the squad did their best to punish DAMWON for their mistakes. In one instance, NS perfectly punishing Jang “Ghost’ Yong-jun and Cho “BeryL” Geon-hee in the bot lane.

Despite their early game success, Nongshim failed to pull through on objectives compared to DAMWON. With a stronger, hard-hitting composition that controlled clashes, DWG ran over Nongshim at every dragon, and claimed the Ocean Soul by the 25-minute mark.

With a few more split-pushes and ganks, DAMWON took over Nongshim’s side of the map and slowly cornered their opponents in their own base for the game two win.

The final match of the series was a decisive stomp by DAMWON Gaming. Even though Nongshim drafted a more flashy composition with Yasuo, Alistar, and Gragas, the team lacked chemistry, and failed to put their best combos forward.

By the halfway mark, DAMWON claimed Dragon Soul. With just one flash by Khan’s Rumble, the World champs traversed Nongshim’s base wall, grabbed three quick kills, and closed out the series with a 3-0 sweep.

Watch DAMWON Gaming and Nongshim RedForce compete in the LCK, which starts its 2021 season on January 13.