The new-and-improved LCK team is eating up the competition. 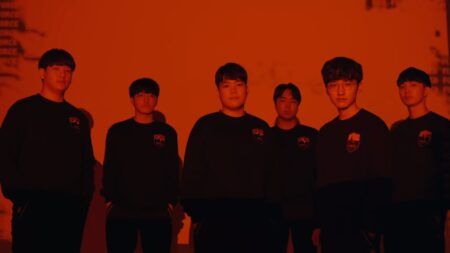 With the year coming to an end, the LCK’s newest line-ups scout out the 2021 competition in the annual December tournament of the KeSPA Cup. With a group stage and a thrilling knockout portion, the tournament will have the recently re-branded team of Nongshim RedForce (formerly Team Dynamics) go up against 2020 World champions DAMWON Gaming in the grand final.

Despite only being a middle-table team in the 2020 season, Nongshim has made solid additions to their roster. Han “Peanut” Wang-ho returned to Korea as NS’s newest jungler while the team picked up a hidden gem in former Griffin player, Park “Bay” Jun-byeong.

The team fared well in the group stage with a primarily new line-up that focused around franchise player Seo “Deokdam” Dae-gil. Even though Deokdam might be seen as the spearhead of the offense, he easily gave way to both Peanut and Bay to pull out their flashiest plays for the win. Unfortunately, the team wasn’t able to best DAMWON in Group A, putting themselves in the quarterfinals against Liiv SANDBOX.

After defeating Liiv with a clutch 2-1 performance, RedForce continued their dominance with a sweeping win over KT Rolster. With Choi “Doran” Hyeon-joon and Son “Ucal” Woo-hyeon not able to make a difference in the first two games, KT went in for a full-squad substitution to give their younger players some playtime. While the game came incredibly close for the young line-up, RedForce’s Cloud Soul acquisition was a winning factor in later team fights.

As for DAMWON Gaming, the team still played to its championship standard in all its games. With no losses in the group stage, the team automatically went into the semifinals and faced Hanwha Life Esports.

Even with Hanwha’s buzzing line-up of Kim “Deft” Hyuk-kyu and Jeong “Chovy” Ji-hoon, DAMWON had an easy time shutting down HLE. While Chovy and the boys were able to steal a game away from them, DWG’s newest top-laner of Kim “Khan” Dong-ha brought out his cutthroat LPL playstyle from his FPX days and slashed through the back-line with his death-less Akali to close out the series.

While DAMWON Gaming is the obvious favorite heading into the final, it’ll be interesting if RedForce can stage a strong draft or playstyle that will counter the superteam. With Peanut also hailing from the LPL, he’ll likely be Nongshim’s best option in shutting down Khan.

The KeSPA Cup 2020 Ulsan final will take place on January 2.