Master Yi players can now choose where to land during Alpha Strike in patch 12.13

Gonna be more difficult to predict. 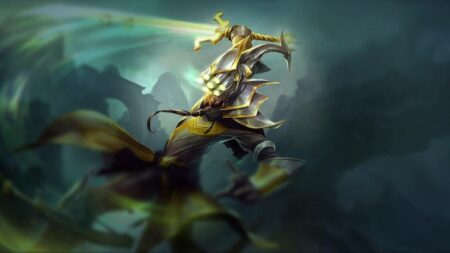 If you haven’t started your ranked climb this season, these League of Legends patch 12.13 buffs to Master Yi will definitely incentivize you.

Acknowledging that he’s a champion that is stronger at lower ranks and less impactful at higher Elo, Riot Games nerfed him significantly in earlier patches this Season 12, but started to hotfix him again even before patch 12.10’s Durability Update.

Patch 12.13 gives him a slightly longer basic attack range, and more skill expression when he uses his bread and butter ability, Alpha Strike. Meditation also received a massive buff that shaves off 19 seconds to its cooldown.

The game developers believe that Yi “is pretty dependent on being durable in higher brackets of play”, they wrote in the patch notes, and hope that these buffs will give him more ways to survive in longer team fights, reducing his rank polarity in solo queue.

Prior to this patch, opposing players could predict where Master Yi lands after casting Alpha Strike. The best time to counterstrike (heh) is after he comes out of Alpha, for it always puts him in front of his primary target. Better players will time and aim their crowd control in this area.

This move made him predictable, and combined with his low survivability, made him an unpopular pick at higher ranks where he held a low 46.74% win rate at Platinum and above on patch 12.12, according to U.GG.

Now in patch 12.13, Master Yi players can choose where to land after Alpha Strike’s animation, opening up a myriad of possibilities. If no direction is selected, he’ll still end up in front of the primary target by default.

Secondly, the big buffs to Meditate cannot be ignored. Not only does it have a much shorter cooldown, it also gives him a huge damage reduction boost in its first 0.5 seconds–an important point for anyone playing against him too–for you might want to hold off attacks the moment you see Meditate’s channel animation.

However, due to server ping plus taking into account reaction times, analyst and content creator Nick “LS” De Cesare pointed out in his patch rundown that the 90% damage reduction within the short 0.5 second time frame may not make any difference at all if you’re not playing in a low ping environment. Combining ping delays, team fight complexity, and human reaction times, opposing players may not even attack Master Yi within the first 0.5 seconds. The lingering damage reduction however, is still a solid buff.